Does the Air Force Really Need Even More Bombers? 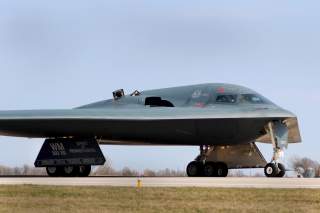 Key point: Bombers pack a punch that few other systems do. Here's why, yes, America needs more of them.

Facing flattening budgets in the coming years, the U.S. Air Force could as a cost-saving measure retire a portion of its roughly 160-strong bomber fleet. But experts and officials agree that, over the longer term, the Air Force needs more bombers, not fewer.

Squaring that circle is a major challenge for budgeteers. The Air Force claims that over the next few years it needs to find $30 billion in savings in its current, $150-billion annual budget in order to pay for new technologies. To that end, Todd Harrison, an analyst with the Center for Strategic and International Studies in Washington, D.C., urged the service to consider axing the B-1 and B-2 fleets.

One retired Air Force general, however, is urging the flying branch to hang on to every bomber, and continue upgrading them. “Reducing America’s current bomber force may significantly increase risk,” Dave Deptula, dean of the Mitchell Institute for Aerospace Studies in Virginia, wrote in Forbes.

Deptula doesn’t disagree that the Pentagon’s overall spending is likely to flatten or decrease following several years of growing budgets. But as planners look for savings, they should spare the fleet of B-1, B-2 and B-52 bombers that the Air Force currently operates as well as the new B-21 bomber that the flying branch is developing in order to replace the B-1s and B-2s.

“There is no question that the Air Force is facing exceedingly difficult resource decisions as it assembles its fiscal-year 2021 budget,” Deptula wrote.

“However, there are core mission areas where the Air Force provides outsized mission value—affording effective and efficient policy options that cannot be accomplished any other way without enormous resource expenditures,” the retired general added. “A single B-1 or B-2 can deliver the same effects as an entire aircraft carrier battle group in some circumstances. Bomber capabilities need to be bolstered, not cut.”

The 1980s-vintage B-1 appears to be particularly vulnerable. Contingents of the swing-wing B-1s for a decade flew practically non-stop over Iraq and Afghanistan. By summer 2019 just seven of the 61 worn-out B-1s were fully mission-capable. The others were undergoing badly-needed repairs or upgrades.

The Air Force officially plans to replace the B-1 fleet with new B-21 stealth bombers sometime in the 2030s. Despite the B-1’s potential as a carrier of hypersonic missiles beginning in the 2020s, Harrison wants the Air Force to consider cutting its losses and sending the B-1s into storage years in 2022.

Likewise, Harrison leaned on the Air Force to contemplate retiring its 20 B-2 stealth bombers in 2023 instead of a decade later as new B-21s arrive to replace them. Not only should the Air Force keep the 1990s-vintage B-2s, but the service should also continue upgrading the bombers.

“There are rumors that the Air Force may need to curtail the B-2 stealth bomber’s defensive management system modernization (an upgrade known as DMS-M) to free up funds,” Deptula wrote. “Such cuts would be troubling given that America needs more long-range strike capability and capacity, not less.”

The B-2 DMS-M is designed to upgrade the ability for America’s only stealth bomber to reach targets inside contested airspace at a time when enemy defenses are increasing in sophistication and lethality. In addition to replacing obsolete, 1980s-vintage parts, the program enables the B-2’s sensors to detect points of danger and circumvent them in real-time, while also improving the aircraft’s survivability.

The program also provides the B-2 with a new mission computer with “open mission systems” that will allow more rapid and affordable upgrades. Failure to complete the program would result in the B-2’s survivability waning in future years, limiting when and where it could execute its strategically critical missions. Said another way, leaders would risk loss of policy options to meet the demands of the national defense strategy.

While some experts might cite the eventual fielding of the B-21 as a reason not to worry about cuts to DMS-M, lessons-learned from other major acquisition programs sound a cautious note. While all publicly known information suggests that the B-21 is on a good path, the aircraft is still in the design phase.

Challenges, future potential budget cuts, production hurdles and a host of other issues could see the new bomber’s operational fielding delayed toward the latter part of the 2020s or even into the 2030s—especially when it comes to specific capabilities like nuclear certification.

It’s possible the Air Force quickly could retire its 61 B-1s and 20 B-2s and make do with the remaining 76 B-52 bombers while everyone waits for fresh B-21s to roll out of Northrop Grumman’s California factory, at which point the flying branch could begin rebuilding the bomber fleet.

Bad idea, Deptula warned. “The B-21 promises to be a very advanced and capable aircraft and the Air Force should procure them in ample numbers as rapidly as possible. However, until the day comes that the B-21 is fully mission-capable in sufficient numbers to meet the needs of the national defense strategy, the legacy bomber force will have to answer the call to fly and fight.”

“Investing in sustaining the viability of these proven aircraft is not an option, it is an imperative.”