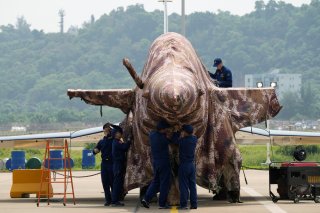 The Chinese military is planning to show an underneath internal weapons bay of its new stealthy, armed GJ-11 attack drone for the first time. This will offer the world an unprecedented public view of a platform likely to receive a lot of attention at the Pentagon.

Will the new platform fire air-to-ground precision missiles or drop glide bombs? The specific weapons characteristics are unlikely to be available; however, a Chinese government-backed newspaper says the drone is built with two internal weapons bays, each with four bomb locations.

Perhaps most of all, the existence of the GJ-11 attack drone raises an interesting question about the maturity of Chinese stealth attacks on air defenses as well as manned-unmanned teaming. For instance, for many years now the U.S. Air Force and its research lab have been working toward developing the “loyal wingman” concept wherein a manned aircraft controls a nearby drone from the cockpit. Of course, this reduces latency, improves the standoff range for pilots, and streamlines attack options for aircraft operating above hostile territory.

A stealthy attack drone, as opposed to less-stealthy U.S. Gray Eagles and AAI RQ-7  Shadow drones controlled by nearby Apache helicopters, may multiply attack options against advanced air defenses while keeping manned jets out of reach from ground fire. The United States is already having great success moving its “loyal wingman” concept toward operation with its Kratos XQ-58 Valkyrie drone which has flown alongside manned fighter jets in U.S. Air Force demonstrations. For several years now, the Air Force has fast been making progress developing the kind of scenario wherein a fifth-generation fighter jet such as an F-22 Raptor or F-35 stealth fighter jet could control drones in real-time from the cockpit, controlling both the flight path trajectory as well as the sensor payload. The operational capacity is fast approaching for the U.S. Air Force.

To what extent is China able to replicate this? Are they able to replicate it with a stealthy attack drone? The existence of this type of drone, especially if it exists in large numbers, introduces new dimensions to a stealth attack. For example, the drone could take on the most high-risk attack missions without putting pilots at risk.

Thus far, U.S. efforts to engineer manned-unmanned teaming do not show the use of a “stealthy” drone, however, DARPA appears to be making fast progress on this.

Early conceptual renderings of DARPA’s new LongShot attack drone show what looks like a stealthy platform. Details regarding the technical configuration of the LongShot drone are not yet available and an actual prototype may not yet exist; however, both DARPA and Northrop Grumman, one of the three competitors DARPA has tapped for the LongShot contract, have released early conceptual renderings of what looks like a stealthy drone. DARPA, which aims to bring ground-breaking attack possibilities to the Air Force, also awarded LongShot developmental deals to Lockheed Martin and General Atomics. Early design work is already underway. Perhaps U.S. efforts with the armed, stealthy LongShot attack drone are well ahead of China’s GJ-11?