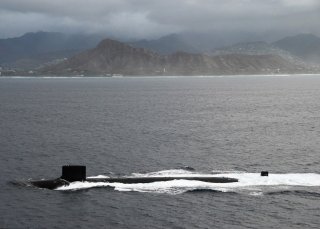 When the leaders of Australia, the United Kingdom, and the United States announced a new pact last week called AUKUS that would seek to transfer nuclear-powered submarine technology to Australia, it triggered a political firestorm with France, which only then learned Australia was withdrawing from a deal with French shipbuilder Naval Group worth tens of billions of dollars to build twelve diesel-electric submarines.

But AUKUS has also come under fire from a different set of critics who may shed few tears for France’s shipbuilding industry, but who still believe the pact represents a potentially dangerous development. Specifically, some in the anti-nuclear proliferation community argue that the sale of nuclear-propulsion technology to Australia opens a Pandora’s box with far-reaching consequences.

To be clear, a “nuclear-powered” submarine does not mean it is necessarily “nuclear-armed.” Rather, it classifies a submarine as having a nuclear reactor enabling it to remain submerged indefinitely, never run out of fuel on patrol, and travel at much higher speeds. These are useful characteristics for Australia due to the long distances its submarines need to traverse to reach ideal operating areas.

Of course, some nuclear-powered submarines also carry nuclear weapons, but non-nuclear submarines can and have carried nuclear armaments too.

So why do arms control advocates frown on transferring nuclear propulsion technology? And why in practice have countries mostly refrained from exporting nuclear-powered submarines?

The Submarine-Shaped Loophole in the Non-Proliferation Treaty

One of the reasons is that most nuclear-powered submarines use Highly Enriched Uranium (HEU) fuel, which has a twenty percent or higher concentration of Uranium-235. All HEU is technically weapons-grade, but practically speaking most nuclear weapons have a concentration of ninety percent.

That caveat doesn’t help much though because British and U.S. submarines are reported to use fuel that’s above ninety percent enriched. But even if Australia were furnished HEU fuel akin to that of Russian submarines (estimated to have a forty percent concentration), such fuel would be that much closer to the materials needed to produce a nuclear weapon.

To be fair, it doesn’t follow that Canberra will seek nuclear weapons just because it has access to HEU fuel. After all, there are many ‘threshold’ states like Japan that could produce nuclear weapons relatively quickly if they chose to, but so far haven’t.

The more pointed concern, argues nuclear physicist James Acton of the Carnegie Endowment for International Peace, hinges on a clause in the Non-Proliferation Treaty (NPT) which exempts from regulatory oversight weapons-grade nuclear materials that aren’t intended for use in nuclear weapons.

Thus, Acton argues that if the U.S. uses this exemption to transfers weapons-grade fuel to Australia for its submarines, it will be seized upon by other states like Iran or Saudi Arabia to exempt stockpiles of weapon’s grade uranium from inspection on the basis it is being used for submarine propulsion—even if that’s not really the case. Perhaps more importantly, it could become harder for the U.S. to get other countries to sanction such behavior if a double standard is perceived to be at work.

But while skeptics of this argument may concede that some bad actors are likely to seize on the AUKUS submarine program for justification, they doubt that those states would have acted differently if the U.S. didn’t offer the submarines to Australia. In other words, the AUKUS precedent would merely offer a convenient rationalization for actions these countries were determined to undertake anyway.

Washington would have a harder time opposing such sales based on its own rationale for selling the technology to Australia. And the U.S. likely would prefer nuclear submarine capabilities didn’t proliferate beyond its allies for its own national interests. Even setting aside balance of power calculations, there is a compelling interest to minimize the odds of weapons-grade materials becoming more accessible to non-state actors (remember the terrorists who stormed a Pakistani naval base in 2011?) or nuclear-powered submarine accidents due to a lack of experience and robust safety culture.

The leases not only provided the Indian Navy with badly needed experience operating nuclear submarines but also had far-reaching consequences by informing India’s development of indigenous nuclear-powered ballistic missile submarines. Despite that, the Russian submarine leases don’t seem to have evoked much controversy.

Hypothetically, though, there do exist nuclear submarines that use non-weapons grade Lightly Enriched Uranium (LEU) for fuel instead of HEU. That suggests an Australian-based LEU submarine could avoid some of the proliferation pitfalls described above.

But there’s a catch: only two countries currently operate LEU-powered submarines. China’s nuclear submarines are believed to use only five percent enriched fuel, and France’s new Suffren-class attack submarines are estimated to use ten percent enriched material. Of course, China is the country Australis is engaged in a security competition with, while Australia just broke up with the manufacturer of the Suffren.

Despite the current furor in Paris, Acton argues the U.S. should invite the French into the pact, both to mend to fences, but also to provide LEU reactor technology and thus avoid having to use the destabilizing HEU loophole.

Another way to mitigate the proliferation issues posed by the AUKUS submarine program would be to ensure Australia purchases HEU fuel from abroad rather than developing its own enrichment capability. That might be a tough sell because Australia exports one-third of the world’s uranium, but it also could save large huge overhead costs needed for Australia to build and scale such capability.

Furthermore, transferring HEU could be made subject to regulatory oversight by the International Atomic Energy Agency (IAEA) and other organizations, even beyond that which is ordinarily required. That could reassure other countries that the uranium fuel isn’t being used for weapons purposes, and thus limit the salience of the NPT loophole.

In the end, the success of Australia’s new nuclear submarine project remains far from certain at this early hour, as there are high political, financial, and technical risks when working with technology that is so expensive, complex, and controversial. Mitigating the deal’s non-proliferation risks is one of them.

Sébastien Roblin writes on the technical, historical and political aspects of international security and conflict for publications including  The National Interest, NBC News, Forbes.com, and War is Boring.  He holds a Master’s degree from Georgetown University and served with the Peace Corps in China.  You can follow his articles on Twitter.