India is Building a Deadly Force of Nuclear-Missile Submarines 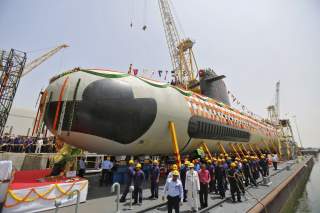 On November 4, 2018, Indian prime minister Narendra Modi announced that the Arihant, the Indian Navy’s first domestically-built nuclear-powered submarine, completed her first deterrence patrol. The Arihant, which means “Slayer of Enemies” in Sanskrit, uses a uranium-fueled pressurized light-water reactor to generate 83-megawatts of electricity, allowing the submarine to swim underwater for months at a time at speeds as high as twenty-four knots.

Even more important than the Arihant’s propulsion system, however, are the weapons presumably stowed in her four vertical launch tubes: up to a dozen K-15 Sagarika (“Oceanic”) nuclear-tipped missiles designed to launch from underwater to annihilate an adversary’s cities and military bases. (Note that the warheads are usually stowed separately from the missiles per Indian doctrine.)

The Arihant is the lead-ship of India’s most expensive defense program ever, valued at $13 billion, with its origins in the secretive Advanced Tactical Vessel program in the 1990s. Indian engineers received substantial Russian assistance designing the Arihant, basing her in part on the Russian Akula-class attack submarine, one of the quietest types operated by the Russian Navy. The Indian Navy’s only other operational nuclear-submarine is the Akula-class Chakra II under lease from Russia through 2022.

However, instead of developing an attack sub for hunting enemy warships and submarines, India’s Defense Research and Development Organization (DRDO) wanted a nuclear-powered ballistic missile submarine (SSBN or “boomer”) to complement India’s land- and air-based nuclear forces. Because nuclear-powered submarines can remain submerged for months at a time and deliver their weapons from underwater, they are considered the asset most likely to survive a nuclear “first strike” by an adversary, guaranteeing an apocalyptic second strike in retaliation.

The Arihant was launched in 2009 but underwent seven years of testing and sea trials before finally being discreetly commissioned in August 2016. However, just four months later, a hatch left open in port caused the 6,500-ton submarine to flood with corrosive saltwater. Because of the bizarre mistake, the Indian Navy was forced to delay deployment for 10 months to replace the submarine’s pipes.

Even with completion of Arihant’s first patrol, however, India’s sea-based nuclear deterrence will require years more of work before it becomes fully credible.

To start with, the Arihant’s ten-meter long K-15 missiles have a range of only around 430 miles, meaning that they cannot strike inland Pakistani targets, including the capital Islamabad. Nor could K-15s hit Chinese cities when launched from the Indian Ocean.

The DRDO has developed a twelve-meter tall K-4 Shaurya SLBM with a range of 2,100 miles that is due to enter service in the early 2020s. Though the Arihant successfully test-fired a K-4 in 2016, technical problems reportedly scrubbed a later test in 2017.

Once the K-4 enters service, the Arihant will finally be able to serve as deterrence against both Pakistan and China. However, the Arihant, which remains in many respects a testbed, can only carry four K-4s—a fraction of the payload carried by most SSBNs around the world.

The Indian Navy will also need more than one SSBN so that at least a few can rotate on patrols, while others undergo repairs or are used for training. Redundancy is also necessary so that the loss of a single boat—whether to enemy action, accidents at sea, or absent-minded maintenance—doesn’t cripple India’s sea-based deterrence.

Towards this end, India has already launched a second Arihant-class submarine, the Arighat, which is expected to be commissioned between 2019-2021. The Arighat has a more powerful reactor and can carry twice the payload: twenty-four K-15 missiles or eight K-4s.

Additionally, the Indian Navy has already begun construction of two to four more Arihant-class boats of progressively larger configurations—dubbed the S4 and S4*—and carry 3,000-mile-range K-5 missiles. By the mid-2020s, the DRDO then plans to begin construction of four larger and more advanced S5 ballistic missile submarines which displace 15,000 tons and are armed with twelve-sixteen launch tubes that can fire K-6 ballistic missiles. These will have a range of 3,700 miles and separate into multiple independent nuclear warheads (MIRVs) when reentering the atmosphere.

The DRDO also intends to apply experience developing the Arihant towards building six Chakra-III nuclear-powered attack submarines. Reportedly, New Delhi’s decision to pursue the 60,000 crore ($8.4 billion) program was prompted by the 2013 patrol of a Chinese Shang-class nuclear submarine in the Indian Ocean. With a speed of thirty knots and indefinite underwater endurance, the Shang-class could potentially hunt down the slower Arihant-class, which has torpedoes for self-defense but is not optimized for such a fight.

However, devising more powerful nuclear reactors remains a stumbling block impeding development of both the S5 SSBN and Chakra III. The former reportedly may require a 190-MW reactor.

By 2022, the Indian Navy will complete a nuclear submarine base called INS Varsha, located on the central-eastern coast of India, southwest of the shipyard at Visakhapatnam. Theoretically, India’s boomers will depart from there on long, quiet patrols within the “bastion” of the eastern Indian Ocean, with friendly air and naval forces close at hand to ward away hostile sub-hunters. The submerged subs would only launch their doomsday weapons upon receiving orders transmitted via extremely-high-frequency radio from a national command authority.

Despite the many milestones ahead for India to bring its SSBN force to maturity, the Indian Navy may possess the missiles and boats to maintain credible submarine nuclear-deterrence by the mid-2020s.

Does this make the world a more dangerous place? India, China and Pakistan between them have a population of 2.92 billion people—nearly 39 percent of all human beings on the planet. A nuclear conflict could easily claim tens, or hundreds of millions of lives.

Fortunately, despite long-running tensions over their Himalayan borders, New Delhi and Beijing both maintain a No-First-Use policy. This means their militaries are authorized only employ their nuclear arsenals in retaliation for an adversary’s nuclear strike. If both states stick to that policy, neither will deploy nuclear weapons against the other.

Of course, adherence to principle is hardly guaranteed in an anarchic international system, particularly if a country believes it is facing an existential threat. Nonetheless, the No-First-Use doctrine profoundly impacts how India and China’s nuclear forces are equipped, trained and organized—as well as how their respective governments signal to each other internationally.

Pakistan, which is allied with China, is a destabilizing factor: it has dispersed dozens of lower-yield tactical nuclear weapons to its forward military units, and claims it is willing to employ them in response to a non-nuclear attack. Unfortunately, simulations suggested that tactical nuclear attacks on battlefield targets are likely to initiate a tit-for-tat exchanges escalating to horrifying strategic attacks targeting enemy populations. Pakistan is also developing a submarine-based nuclear deterrent using simpler diesel electric submarine that can launch nuclear-tipped Babar cruise missiles.

As China is also developing a nuclear-capable stealth bomber, the world’s two most populous nations will soon likely boast full nuclear deterrence triads on air, sea, and land. Hopefully, the destructiveness of those capabilities will serve to make resorting to nuclear arms an even more unattractive option for resolving disputes, because the outcome of a regional nuclear exchange is horrifying to contemplate.