Does the New German Panther Tank Have Futuristic Firepower? 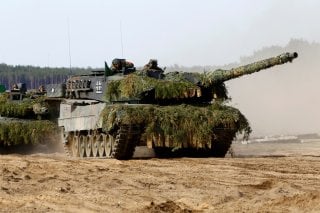 The newly unveiled Rheinmetall KF51 Panther tank is reported to be built with a 130mm Future Gun System, a weapon larger than the standard 120mm weapon used on the Abrams, something which raises questions about the extent to which the new platform represents a technological advancement.

The tank appears to weave in new and more capable technologies. However, it is unclear just how much the new tank rivals or surpasses the most current variants of the U.S. Army’s Abrams battle tank.

A recently published Popular Mechanics article said that “the new gun is a 130-millimeter/L52 gun, meaning the barrel length is 52 times the diameter of the barrel. That comes out to 6,760 millimeters, or 22.1 feet long. The barrel is also fitted with a futuristic-looking shroud, but it’s not clear how it contributes to the efficiency or effectiveness of the tank.”

Abrams developers explain they have developed the technology for “modular’ gun applications, meaning a 130mm cannon could be added on as needed. Regarding lethality, it seems significant that the article on the Panther does not mention ammunition, as that is an area wherein there continues to be impactful innovations. The newer Abrams tanks have an ammunition data link. Not only are there things like delayed fuses for added penetrating effects, proximity fuses for area detonation, or “point-detonate” kinds of round, but for many years the U.S. Army has been developing its advanced multi-purpose round for tanks. The round enables crews to decide the energetics or specific “blast effects.” It also combines three different kinds of munitions into a single round of ammunition which can be adjusted or programmed by tank gunners to achieve specific attack effects as needed by the mission. The AMP consolidates high-explosive anti-tank (HEAT) rounds, multi-purpose anti-tank (MPAT) rounds, canister rounds, and obstacle reduction rounds into a single munition using new technology and an advanced ammunition data link.

The M830 HEAT round and the M830A1 MPAT round are the first two munitions to be consolidated. The M1028 canister round, which is used to engage and defeat dismounted infantry, is the third one being replaced. The canister round is effective against human-wave assaults with a scattering of small projectiles to increase anti-personnel lethality. The M908 Obstacle Reduction round, which is designed to destroy large obstacles, is the fourth included in the integration. Tank crews can choose which round effect to use through an ammunition data link, according to documents from Northrop Grumman. The data link enables “direct communication from the tank fire control to the cartridge chambered in the breach,” Northrop Grumman documents say. It uses a mechanical-electrical interface, and “communication is enabled when the round is chambered and the tank is armed.”

The AMP round is capable of expanding the tactical attack envelope for tank crews quickly respond to different threat scenarios.