Does Russia Really Have Air Superiority in Ukraine? 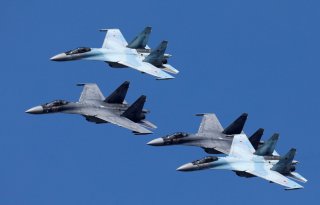 The Russian Defense Ministry has published a video of Su-35 and Su-30SM fighter jets being used in combat in Ukraine.

The clip, uploaded to Telegram, purportedly shows fighters taking off from unidentified runways to fly sorties in Ukraine. The video depicts one of the fighters firing an air-launched missile before cutting to the aircraft landing on a runway on a rainy day. A commentary accompanying the video said that the fighters are armed with air-to-surface missiles for targeting Ukrainian air defenses and air-to-air missiles for engaging Ukrainian fighters.

The Russian Defense Ministry also published an interview with a Russian fighter pilot who it claimed: “displayed courage during the special operation in Ukraine.” The pilot, identified only as “Klim,” told Russian state media that he and his fellow pilots have never had to engage Ukrainian fighters in the air. "The enemy simply abandons the battlefield as soon as it gets into the radars of our fighters," he said, according to state-backed news outlet TASS.

Klim recalled his encounter at the beginning of the invasion—officially described as a “special military operation” by the Russian government—with a pair of Ukrainian Su-27 fighters. "When we approached our maximum launch and effective range, we locked on the target. The radar emissions alert system was activated. Possibly, it was reported from the ground that we were within our effective range as we were already flying at a supersonic speed. So, the enemy turned away,” he said.

Klim said the primary task of Russian Su-30SM and Su-35 jets at this stage in the war is to eliminate the remnants of Ukraine’s air defenses. "During the first several days, there was a large amount of shelling attacks on our group, i.e. surface-to-air missiles. On average, they fired up to four missiles at us in a sortie," Klim said, referring in particular to Ukraine’s Western-supplied Stinger missiles. "Eventually, this effectiveness declined. There are now cases when they make no attempts to counter our groups. We analyze and see how it [the enemy] operates and what versions it is working on. We also make adjustments each time so that none of the sorties can look like the previous one," the pilot said. It is unknown how many combat sorties have been conducted by Russian jet fighters since the invasion began on February 24.

The Russian military claimed in the first week of the war to have achieved “air superiority over the entire territory of Ukraine.” That claim was widely disputed at the time by Western military and intelligence officials. There are indications that Russian forces have achieved limited air superiority in regions firmly under Russian control, but they have so far been unable to reliably extend this advantage to all of Ukraine’s airspace.