Does the United Kingdom Have Enough Money for Its Carriers and Their Escorts? 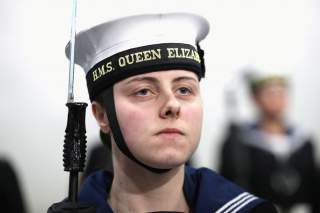 Key point: London wants to have it all, but it may not have the funds to maintain its navy. In fact, the cost of its carriers will make it harder to build other ships or acquire for jet fighters.

The Royal Navy in late 2019 announced the composition of its first-ever aircraft carrier battle group. And it’s both good and bad news for the storied fleet.

Good news because the Royal Navy just barely should be able to generate all the ships and planes it need to deploy an entirely British battle group.

Bad news because frequent deployments with the same mix of ships clearly is unsustainable as the Royal Navy shrinks, the inevitable result of decades of declining budgets.

Queen Elizabeth’s air wing for the deployment, which could take the carrier group through the Mediterranean Sea to the Persian Gulf en route to the Pacific Ocean, will include 24 F-35B stealth jump jets, including U.S. Marine Corps aircraft, in addition to helicopters.

That’s a lot of combat power. But it stretches the U.K. armed forces’ capacity. The Royal Navy possesses just six destroyers, 13 frigates and six attack submarines. But usually more than half of those vessels at any given time are in shipyards for repairs or refits.

In deploying with four destroyers and frigates plus a submarine, Queen Elizabeth will leave the United Kingdom with just a handful of surface warships and potentially one attack submarine for other taskings.

Likewise, the flattop’s air wing during that first deployment could require every single deployable British F-35. It’s not for no reason that fleet officials have stressed the U.S. Marine Corps’ willingness to contribute jump jets to the deployment.

“We are constrained by the F-35 buy-rate even though that was accelerated in [the strategic defense review] in 2015, so initial operating capability numbers in 2020 are going to be very modest indeed,” said Capt. Jerry Kyd, Queen Elizabeth’s former skipper. The Royal Air Force was able to generate just seven F-35s for trials aboard the carrier in late 2019.

Defense secretary Ben Wallace acknowledged the strain the 2021 carrier cruise will place on the armed forces. “It is definitely our intention, though, that the carrier strike group will be able to be a wholly U.K. sovereign deployable group.”

Bowing to reality, however, Wallace left open the possibility of shrinking the escort force in future carrier deployments or, as an alternative, inviting NATO allies to contribute ships to British carrier groups. “Depending on the deployment, of course, we will cut our cloth as required.”

“We are already engaged with international partners to understand how we will integrate an Arleigh Burke destroyer from the U.S. or a Dutch destroyer into that package,” Air Marshal Richard Knighton said.

Still, the heavy demand carriers place on escorts is driving fundamental change in the way the Royal Navy tasks its ships.

The fleet’s current deployment model, for the most part, sends out single warships on solo patrols, each at their own pace. With two new aircraft carriers slated to begin deploying over the next two years, the U.K. fleet must figure out how to deploy, as a cohesive force, large numbers of warships comprising a carrier battle group.

David Axe serves as Defense Editor of the National Interest. He is the author of the graphic novels  War Fix, War Is Boring and Machete Squad. This first appeared in January 2020.