Does the U.S. Navy Have a 'Confidence' Problem? 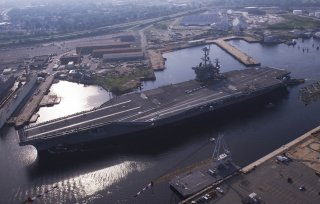 Capt. Kai Torkelson, commander of the Norfolk Naval Shipyard (NNSY), was removed from his job on Monday. In a statement, the U.S. Navy said Torkelson was relieved by Vice Adm. Bill Galinis, the head of Naval Sea Systems Command (NAVSEA), due to a loss of confidence in Torkelson’s ability to command.

The Norfolk Naval Shipyard in Portsmouth, Virginia is the U.S. Navy’s largest and oldest industrial facility. Located on the Elizabeth River, the yard is a short distance from its mouth at Hampton Roads. It was established as the Gosport Shipyard in 1767, which was destroyed during the American Revolution. It was rebuilt as the Navy’s first operational drydock in the United States in the 1820s. It changed hands during the American Civil War and was used by the Confederate States Navy until it was destroyed in 1862. It was rebuilt after the war and has continued operation to the present day—and it is known as “America’s Shipyard.”

While it is the largest Navy base in the world, it is considered one of the least desirable postings today. Another report warned that the base could be sinking!

The decision to remove Torkelson reportedly was based on his oversight of the shipyard’s output, not due to a single or specific incident.

The Navy spent $2.8 billion from 2015 to 2019 to improve the performance of its shipyards, as it has faced persistent and substantial delays in ship maintenance. A Government Accountability Office (GAO) report issued last month called out the issues, but this was not exactly “news” to the Navy, which has too few shipyards to repair its warships. The GAO report said that the Navy has made progress on the workforce efforts at Portsmouth Naval Shipyard, Puget Sound Naval Shipyard and Intermediate Maintenance Facility, and Pearl Harbor Naval Shipyard and Intermediate Maintenance Facility. Norfolk was singled out as the lone yard that was still moving in the wrong direction, according to the GAO report.

USNI News also reported that Capt. Dianna Wolfson will take command of the shipyard by early 2021. She is currently the commanding officer of Puget Sound Naval Shipyard and Intermediate Maintenance Facility, a job she assumed in June 2019. Capt. James Paul Mosman, formerly Norfolk Naval Shipyard’s operations officer and currently serving with SEA 04 with Markle, will then take command of Puget Sound.

Torkelson is a third-generation naval officer, and he assumed command of Norfolk Naval Shipyard in June 2018. He spent twelve years as a submarine officer before joining the engineering community. He was one of the first five engineering duty officers to volunteer for an Operation Iraqi Freedom assignment. He was awarded the Bronze Star, Meritorious Service, Navy Commendation and Navy Achievement Medals.

Torkelson is at least the fourth Navy leader to be relieved of command in the last month due to a loss of confidence.

Military.com reported Cmdr. Robert Arias was removed as Naval Technical Training Center Lackland’s commanding officer on Sept. 11. Cmdr. John Gaines was relieved of command of the guided-missile destroyer USS Arleigh Burke (DDG 51) on Sept. 3 after an investigation into self-reported personal misconduct. And Cmdr. Erin Borozny was relieved of command of Navy Operational Support Center Portland, Washington, in late August over a loss of confidence in her ability to lead.