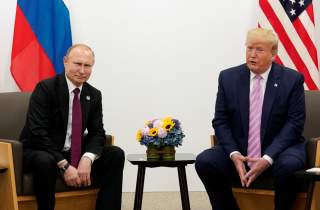 Key point: Trump could still take a different view of New START, but there is little time.

U.S. President Donald Trump has one year to sign an extension of the New Strategic Arms Reduction Treaty.

“No matter your political orientation, treaty extension is a no-brainer,” wrote Matt Korda and Hans Kristensen, analysts with the Federation of American Scientists.

New START is the last major arms-control accord limiting the size and power and the U.S. and Russian nuclear arsenals.

But the treaty expires on Feb. 5, 2021 unless Trump and Russian President Vladimir Putin both sign an extension. The expiration would be very dangerous for the entire world.

Putin in 2019 signalled he would extend New START without any pre-conditions. Korda and Kristensen listed several main reasons Trump promptly should do the same.

“If the treaty expires, there will be no constraints on U.S. or Russian strategic arsenals for the first time since 1972,” Korda and Kristensen wrote. “It would remove caps on how many strategic nuclear missiles and bombers the two sides can own and how many warheads that are carried on them.”

“This means that Russia could quickly upload about a thousand new warheads onto its deployed missile arsenal -- without adding a single new missile. The United States could upload even more because it has more missiles and bombers than Russia. And both sides could begin to increase their arsenals, risking a new nuclear arms race.”

“New START offers transparency and predictability in an unstable world,’ Korda and Kristensen added. “Under the current treaty, the United States receives a notification every time a Russian missile is deployed, every time a missile or bomber moves between bases and every time a new missile is produced.”

“Without these notifications, the United States would have to spend more money and incur significant risks to get the exact same information through National Technical Means (i.e., satellites and other forms of site monitoring). Russia benefits in the same way.”

“Why would we willingly give all that up -- to get absolutely nothing in return?” Korda and Kristensen asked.

If New START expires, there’s virtually no second chance to restore its limits on the world’s major nuclear arsenals. “If New START expires next year, arms control between Russia and the United States as we know it is effectively over,” Korda and Kristensen explained.

“Given the underlying East-West tensions and upcoming dramatic governance shifts in both the United States and Russia, there appears to be little interest or bandwidth available on either side in negotiating a new and improved treaty.”

“At risk of stating the obvious, negotiating a new treaty is exponentially more difficult than extending an existing one.”

It’s unclear how Trump feels about New START, but the signs are not encouraging. Trump has overseen a rapid and reckless dismantling of existing treaties and international accords. At Trump’s urging, the United States has scrapped limits on intermediate-range nuclear-capable missiles while also moving to deploy “easier-to-use” low-yield nukes.

“Trump’s national security team has dithered for more than a year on beginning talks with Russia to extend [New START] before it expires,” Daryl Kimball, an expert with the Arms Control Association in the United States, explained in mid-2019. ”It is now apparent that Bolton is trying to steer Trump to discard New START.”

“There's no decision, but I think it's unlikely,” Bolton said of a New START extension in a June 2019 interview.

At the time, the Trump administration’s cover story for possible sabotage of New START was that it wanted a new, three-way nuclear-weapons pact that also includes Beijing. But negotiating a three-way treaty could take years and should not preclude an extension of New START.

Now that Bolton is no longer Trump’s advisor, and even flirted with testifying against Trump during the president’s February 2020 impeachment, it’s possible the administration takes a different view of New START.

But we just don’t know. And the clock is ticking.