Donald Trump Mentioned a 'Super-Duper' Missile. It Might Be Hypersonic. 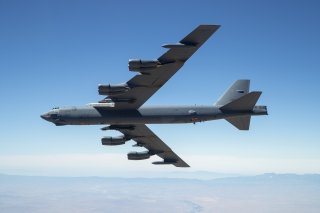 President Donald Trump boasted during a press conference in May that the United States had a new missile. “I call it the ‘super-duper missile,’ and I heard the other night it is seventeen times faster than what they have right now when you take the fastest missile we have right now,” Trump said. Though he was rather scanty on details, the missile in question is likely the hypersonic AGM-183A ARRW, which stands for Air-Launched Rapid Response Weapon. Being hypersonic, it is fast—really fast.

In a controversial move, the United States Air Force opted for the AGM-183A ARRW over another hypersonic missile project, the HCSW on account of the former missile’s smaller, more compact size. An acquisition official with the Air Force that “the reason we went with ARRW was not that HCSW was bad, but ARRW is smaller,” it could be mated to both bombers and fighter jets, giving the service better munition flexibility. “We can carry twice as many on the B-52, and it’s possible it could be on the F-15,” the official elaborated.

The AGM-183A ARRW is a glide-boost type of system. Munitions of this type use a rocket motor base to propel them up to hypersonic speeds, at which point the rocket separates from the glide vehicle, and glides to its destination to deliver explosive payload.

Other countries, notably China and Russia, are also working towards developing their own hypersonic missiles. One of China’s most noteworthy hypersonics, the DF-17, was prominently seen during an annual military parade just last year when it caused a flurry of both media attention and alarm.

Russia, too, is no latecomer to the hypersonic arms race. Its Zircon missile (alternatively spelled Tsircon or Tsirkon) seems to be in a more mature stage of development than American hypersonics. It may also be the only country to have successfully mated hypersonic missiles with submarines.

Still, putting hypersonic missile on both bombers and jet fighters is a step in the right direction. As the United States prepares for a potential conflict with near-peer rivals China and Russia, the realm of hypersonics may be one of the deciding factors. Let’s hope it’s not too little, too late.