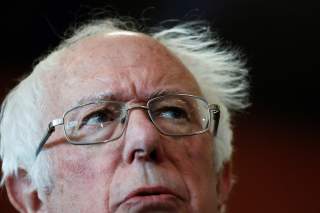 When Bernie Sanders declared his second run for the presidency in February 2019, there was considerable doubt in the political universe that the senator from Vermont could pick up where he left off three years prior. His first run for the White House against eventual Democratic nominee Hillary Clinton surpassed all expectations, much as Donald Trump blasted through and co-opted the GOP political establishment in 2016. Was Sanders’ 2016 campaign, where he mobilized tens of thousands of people to his rallies and captured over 12 million votes, a one-off or the beginning of something special?

Admittedly, we still don’t know the answer to that question. The Democratic primary is in its infancy, with a lot of voting scheduled over the next month. But it’s as obvious as the snow is white that Bernie hasn’t lost his ability to inspire loyalty among his followers. A politician once scapegoated as a gadfly is now the bonafide frontrunner for the Democratic nomination, winning a razor-thin victory in New Hampshire, scoring a close second in Iowa (first in the popular vote), and on his way to a strong showing in Nevada next week. The momentum generated by the first two primary contests has propelled Sanders to the national poll leader, 10 points above the wobbly Joe Biden.

The denizens and graybeards of the Democratic Party are starting to take notice of Bernie’s position, and they are working overtime to inspire Democrats nationwide to vote for a more “electable” candidate. Moderate lawmakers from the Texas State House to Capitol Hill are running around with their hair on fire warning people about the negative down-ballot impact of Sanders being at the top of the ticket. Big personalities on MSNBC like Chris Matthews, James Carville, and Lawrence O’Donnell are either furious with rage that Sanders is in good shape or are openly yelling at him for being a “communist (the Sanders campaign has complained about media bias ever since the senator jumped into the race).”

The possibility of a Trump v. Sanders matchup in November is so unimaginable to Matt Bennett, the executive vice president of Third Way, that he has made stopping Sanders’ momentum a personal crusade. In USA Today, Bennett and his colleague, Lanae Erickson, dismissed Sanders’ electorate feats as a mirage. “If Democratic voters, hungry for a winner, buy into that myth and believe that Sanders is the most “electable” candidate,” the two wrote, “they will be making a grave mistake that could hand the presidency back to Donald Trump.”

Much as the Washington Post’s Jennifer Rubin and Max Boot have gotten famous condemning Trump in their columns every single day of the week, the two are now spending more time taking aim at Sanders on everything from his support for universal healthcare to his health.

Some of the criticisms about Sanders are legitimate. Regardless if you’re a diehard Bernie supporter or a middle-of-the-road centrist, whether Sanders can keep his supporters in-line while simultaneously pulling in the Clinton-wing of the Democratic Party during a general election is an open question. We don’t know whether Sanders can rise to this challenge because he has never had to do it. But it seems a bit premature and frankly snarky for the prognosticators to assume he doesn’t have a shot. Many of them laughed at Sanders in the spring of 2015 when he decided to get in the race. Needless to say, the laughing turned out to be misplaced as Bernie lasted far longer than many assumed and gave the Clinton campaign a run for its money.

There is no 100% certainty in American politics, even if the talking heads and data specialists pretend otherwise.

Indeed, there was a time in the not-so-distant past when prognosticators, TV pundits, party insiders, and donors made similar assumptions about Donald Trump. Whether it was Karl Rove warning about the consequences for the Republican Party if Trump was nominee (“If Mr. Trump is its standard-bearer, the GOP will lose the White House and the Senate, and its majority in the House will fall dramatically”) to Bill Kristol predicting a rapid downfall for Trump if he loses Iowa (long story short: that didn’t happen), some of the most experienced people in the business can be made to look like amateurs. Everybody needs to be very careful about painting a candidate with a broad brush. One of the fastest ways to discredit yourself is by allowing your assumptions to push aside the facts. And yet, like clockwork, it happens during every election cycle.

Granted, prognosticators prognosticate. It’s what they do. They get paid big bucks for doing it, even if many of their predictions look ridiculous as time goes by. The 2020 campaign is no exception.

But the hand-wringing about Bernie Sanders from the usual corners of the Democratic Party is starting to get as tiresome as the sky-will-fall rhetoric about Donald Trump three years ago. The only difference is that with Bernie, we haven’t even reached South Carolina yet.