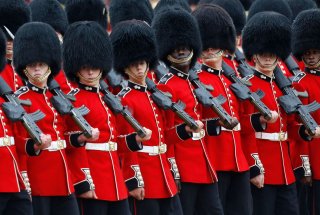 After the so-called “miracle of Dunkirk,” in which the British military were able to successfully evacuate the majority of the British Expeditionary Force, along with a large number of French troops, after France fell to the Germans in late May and early June 1940, the British government was presented with a serious problem.

Much of its heavy equipment and even vast quantities of small arms had been left on the continent. While the British Army still was producing its Bren Gun, it simply needed weapons that could provide some added firepower. To solve that problem the British Army rushed into development the Sten Gun, the simple weapon that cost just $10 to produce. In addition, the United States also supplied some quantities of its Thompson submachine gun—but there remained a great demand for more weapons.

At the same time the Royal Air Force (RAF) determined that a submachine gun would be necessary for the defense of its airfields—yet instead of following the British Army’s lead with the Sten Gun, it opted to create a direct copy of the German MP28/II submachine gun, an updated version of the World War I era MP18.

The result was the Lanchester; a 9mm, blowback submachine gun that fired from an open bolt and which proved to be far more rugged and reliable than the Sten Gun even if it was heavier and a bit more costly to produce.

The project to develop this weapon was headed up by George Herbert Lanchester, an English engineer who ran the Lanchester Motor Company before selling his family’s company to BSA. After the outbreak of World War II, George Lanchester went to work at the Sterling Armaments Company, which subsequently produced the copy of the German machine pistol. So while named for Lanchester, he didn’t technically design the firearm—but copied a proven design and one that was actually fairly simple to produce.

The MP28/II was itself little more than an update of the MP18, the first widely employed submachine gun, which had been used to much success by German “storm troopers” at the end of the First World War.

What is notable is that the MP28 was produced by the German firm Haenel under the direct supervision of Hugo Schmeisser, and it served as inspiration for the Finnish Suomi Model 31—which itself served to influence the PPSh-41. In this way the British Lanchester and Soviet PPSh-41 were loosely related through the MP28.

However, while the Suomi and PPSh-41 improved upon the MP18/28, the Lanchester was still just an outright copy to the point that the British weapon could use the magazine and even the bolt assembly from the German gun. Where the German weapon essentially used a Mauser rifle stock, the British Lanchester utilized the wood butt and stock that were designed for the Lee-Enfield No. 1 Mk III rifle. The only notable improvements were that the Lanchester featured a brass magazine well, which made it an even more rugged firearm. It also featured a bayonet mount—a feature lacking in most other submachine guns of the era as well as the MP28. The brass well along with a brass butt plate were also employed as the metal was impervious to corrosion from saltwater—which became important in the Royal Navy’s decision to adopt the weapon over the Sten Gun.

The Lanchester measured 2-feet, 10-inches in length and weighed 12 pounds loaded. It was chambered for the German-designed 9x19mm Parabellum round, which of course was used in the MP18/28. It could be fitted with a 50-round magazine, but was also compatible with the Sten Gun’s 32-round magazine. The Lanchester featured a blowback action and fired from an open bolt with a rate of fire of 600 rounds per minute, and an effective range of 150 meters.

As with the MP18/28 the metal hardware could be swung open for cleaning, making it easy to field strip as well. This proved highly important as many RAF airmen and Royal Navy sailors hadn’t been as accustomed to cleaning and servicing small arms as their Army counterparts.

The Lanchester was produced in two versions, and this has led to some confusion. The two versions included the “Mk 1” and the “Mk 1*,” whereby the latter was a simplified version of the former and omitted the fire mode selector and with simplified rear sights. Only a true “Mk 1” was capable of semi-automatic and full-automatic fire, but many of those Lanchesters were modified to the Mk 1* version.

In total, less than 100,000 Lanchesters were reportedly produced during the war with Sterling being the main producer of nearly 75,000 units. Other firms, including Greener and Boss each also produced far lower numbers, with the former producing approximately 17,000 while the latter produced less than 4,000 in total. By contrast millions of Sten Guns were produced, which is why that firearm is remembered (for good and bad), while the Lanchester is largely forgotten.

The biggest negative, apart from its weight, was that not only did it cost more—the Sten cost around £2 ($10) per unit while the Lanchester cost around £14—but the latter weapon required a far more skilled craftsman and used more materials, including all-important brass.

Yet, the Lanchester, despite being based on an old design, was rugged and reliable. While the Sten Gun was retired soon after the war, the Lanchester remained in service with the Royal Navy, the Royal Canadian Navy and other Commonwealth navies at least into the late 1960s. It was used by the Royal Navy and Royal Marines during the Malayan Emergency (1947-60) while the British Army actually used the Lanchester in limited numbers in the 1952-60 Mau-Mau uprising in East Africa.

The weapon was finally withdrawn from Royal Navy service in the 1970s, highlighting not only the British ingenuity but also the longevity of the MP18/28.