Look Closely: This Was One of the Best Submachine Guns of World War II 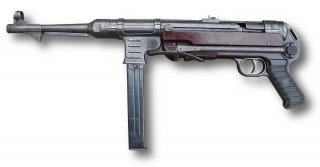 World War II saw the development of some fine—and arguably not so fine—small arms. In the category of the submachine gun, the United States military had its Thompson, the Germans had the MP40, the Soviets had the PPSh-41 and the British had the Sten Gun.

While the StenGun arguably comes in at the bottom of most lists, the Soviet’s PPSh-41 is often regarded as one of the very best submachine guns fielded during the war. The blowback weapon was reliable, rugged and had a blisteringly fast rate of fire in excessive of one thousand rounds per minute. It was not uncommon for German soldiers to use a captured one in favor of their own issued weapons.

However, the success of the PPSh-41 can be traced back to the Red Army’s struggle in the 1939–40 “Winter War” with Finland. The Soviets under Joseph Stalin expected a quick victory—likely one that would mirror Germany's swift defeat of Poland in the early autumn of that year. However, the Finns proved tenacious and while they lacked the tanks or aircraft that the Red Army could throw at them, they had the Suomi KP/-31.

Officially known as the Suomi-konepistooli for “Finland-submachine gun” or literally “Finland Machine-pistol” it entered service in 1931 and it has been described as one of the most successful submachine guns of World War II.

Its design dated back to 1922, and it was based on a prototype known only as “M-22,” which evolved into the KP/-26. That weapon was chambered for the 7.63 millimeter Mauser round and sported a curved magazine. The development of the weapon is unique in that in the 1920s and 1930s Finland was slowly building a domestic arms industry. The nation was newly independent from Russia when a coalition of farmers, middle-class and upper-class social strata known as the White Guards defeated the Finnish Reds, which were made up of industrial and agrarian workers in a brief, but albeit bloody, civil war.

With the rise of the Soviet Union, Finland’s government knew war would come sooner or later and sought to develop weapons to address such a threat. While the KP/-26 was a good first attempt, Finland had become a “can-do nation” that knew it could do better. The designers returned to the drawing board.

It sported a typical rifle-style wooden stock body that held the receiver and the other internal working components. Unlike the KP-26, the KP/-31 was chambered for the common 9x19 millimeter Parabellum cartridge.

It was not a refined weapon by any means. It was heavy at just over ten pounds, and it featured a simple straight blowback operation. More importantly, it was rugged, continued to operate in the worst winter conditions and thanks to its simple firing mechanism and weight made it easier to control and more accurate than the Soviet Union’s later PPSh-41.

While it could be used with twenty-, thirty-six-, forty- and even fifty-round detachable box magazines, the weapon was largely employed with a drum magazine that held seventy-one-rounds. That latter option gave the Finnish soldiers an advantage when facing waves of Red Army soldiers as the Finns could “spray and pray” at the attackers without the need to reload as often. As noted it was accurate and deadly at close ranges.

Also unique about the KP/-31is that it was a submachine that featured a replaceable barrel—and that feature proved crucial in the close fighting in the frigid temperatures during the Winter War. Whereas other weapons might overheat from extended fire, Finnish soldiers could swap out the barrel and keep blasting away! No other submachines of the era allowed for such quick changing of the barrel.

The KP/-31 proved ideal for the conditions of the Winter War and was used throughout the Continuation War (1941–44), while it was then used against the Germans in the brief Lapland War at the end of the larger World War II.

To help address the high production cost, Finland had exported the weapon and it was used by both Bolivia and Paraguay during the Chaco War, while both sides also used the KP/-31 in the Spanish Civil War. During World War II, when Finland joined Nazi Germany to fight the Soviets in the Continuation War, Finland supplied some three thousand to its Axis partner, and many of those were used by the Waffen-SS and other volunteers from Norway.  In addition to being a reliable weapon in the cold winter conditions, the submachine proved it was just as reliable in the dry and hot conditions of the Middle East as it was used in the 1948 Arab-Israeli War.

However, its lasting legacy may have been in how the design and use of the drum magazine may have allowed the Soviet’s Red Army to refine its PPD submachine and create the improved PPSh-41.