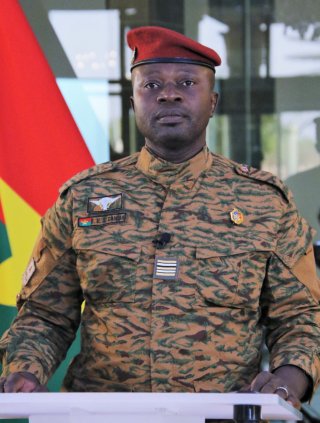 The announcement of the suspension was made on Friday, four days after members of the “Patriotic Movement for Safeguard and Restoration” (MPSR) announced that they had taken over the country on Burkinabe state television. Prior to the announcement, MPSR soldiers had abducted President Roch Kabore and held him captive inside the main military base in Ouagadougou, Burkina Faso’s capital.

The MPSR’s leadership—chaired by Paul-Henri Sandaogo Damiba, a former lieutenant colonel in the Burkinabe armed forces—claimed that Kabore had been forced out for his failure to resolve the Islamist insurgency in Burkina Faso’s eastern region, in which scores of civilians and soldiers have been killed.

However, other African officials have criticized the takeover, insisting on Kabore’s release and an immediate return to civilian rule.

Ghanaian President Nana Akufo-Addo, the current chairman of ECOWAS, described the coup as “a direct violation of our democratic tenets.”

“The rest of the world is looking up to us to be firm on this matter,” Akufo-Addo said, justifying ECOWAS’s swift suspension of the new Burkinabe government.

Burkina Faso is the third nation to be suspended from ECOWAS in the past two years for a military takeover. Mali and Guinea were suspended in 2020 and 2021 for similar takeovers, although economic sanctions intended to incentivize a return to civilian rule in each country appear to have had little effect.

In an attempt to resolve the crisis, a delegation of ECOWAS officials traveled to Burkina Faso on Saturday for meetings with the new government. A second series of meetings will take place on Monday. Once the meetings are complete, the heads of state of the ECOWAS nations will meet again in Ghana to assess the situation and consider further sanctions against Ouagadougou.

Akufo-Addo was not alone in his criticism of the military coup. At the same meeting, Niger’s foreign minister noted that the military had ironically justified its takeover by highlighting Kabore’s failure to defeat the Islamist insurgents, even though its failures in the field were at least in part due to its own mistakes.

The Nigerien foreign minister also criticized the MPSR’s apparent decision to call on the Wagner Group, a controversial Russian mercenary organization, for assistance against the insurgency.