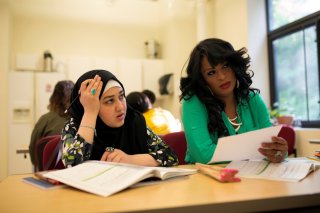 No matter the country, the way policymakers present the issue of immigration to the public is crucial. In recent years, war and climate change have displaced large numbers of people. The sudden influx of migrants into developed countries has caused major challenges for host governments and has helped spur the rise of anti-immigrant, right-wing nationalist movements.

In recent years, an influx of refugees attempting to enter Europe has caused anxiety within the populations of several European states. Polls show that many Europeans link migrants to fears of unemployment and terrorism. This has led to an increase in xenophobic political slogans and sentiments. Refugees and migrants have become convenient scapegoats for economic downturns and government failures while also serving as an effective tool in rivalries between political parties.

Covid-19 has added to this sense of panic. The International Organization for Migration (IOM), an inter-governmental organization in the field of migration, appealed recently to G20 leaders to provide Covid-19 vaccines to displaced peoples. “Coordinated action with equitable access to public health resources is the only way to face down a global public health scourge like Covid-19,” the IOM stated. But fears of new arrivals bringing waves of Covid-19 with them have exacerbated pre-existing anti-migrant sentiments among many Westerners.

These fears show an ignorance of the benefits that migrant communities can provide to their host countries. Since 1995, immigration has been the main contributor to population growth in developed countries, and since 2020 it has been the only contributor. Models have predicted that the population of developed countries will begin to decline by 2050 and that these states will not have large enough workforces to support their aging populations. Even the influx of migrants alone will not solve the problem of population decline. However, it can still help address part of this looming demographic challenge.

Migration can be a solution to demographic challenges in both the developing and developed worlds. In order to prevent immigration from feeding xenophobic sentiments, governments need to carry out careful planning and public education. A sustainable and effective solution for developed countries could be to expand immigrant recruitment programs and to incorporate the discussion of immigration and its benefits into public discourse. Efforts should focus on educating the public that immigrant communities are an economic boon, not a burden.

Fatemeh Aman is a non-resident senior fellow at the Middle East Institute. She has written on Iranian, Afghan, and broader Middle Eastern affairs for over twenty years. She has worked and published as a journalist, analyst, and previously as an Atlantic Council non-resident senior fellow. Her writings have appeared in numerous publications including Jane’s Islamic Affairs Analyst, Jane’s Intelligence Review, and publications of Atlantic Council and the Middle East Institute.