At COP26, the New Cold War Comes to Climate Change 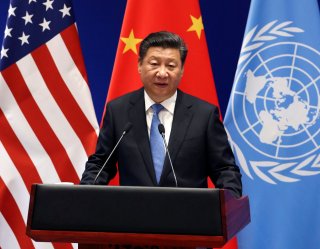 “It is not a secret that COP26 is a failure,” proclaimed Swedish activist Greta Thunberg to thousands of young people who gathered to protest in the streets of Glasgow. Even before the conclusion of the two-week meetings, that statement sounded as an early indictment on the refusal of attending countries to undertake more decisive climate action.

Before the conference, the creation of broad alliances aimed at reducing fossil fuel consumption, decreasing greenhouse gas emissions, and accelerating the transition toward clean energy had been announced. The problem is there was no definite timetable, whereby it all appears to have been a mere rhetorical exercise. “Our leaders are not leading,” Thunberg admonished them as usual.

And she is quite right, although for different reasons. In reality, young people who are fighting against global warming have been addressing interlocutors of the second order of importance. In other words, the country that should have been listening to their demands, the most reluctant to reduce emissions, was not even there. In any case, if leaders are not leading it is also the result of their inability to bring the greatest polluter on the planet to the summit to listen, much less to negotiate.

I am referring to China. According to a thorough study published by Bloomberg News, in 2019, the five most polluting countries were responsible for over 60 percent of global emissions. That year China emitted the same amount of CO2 as the next four countries together—i.e., United States, India, Russia, and Japan. Incidentally, Russia did not go to Glasgow either.

Just to illustrate the magnitude of the problem, take three examples. China Baowu, the largest steelworks in the world, emitted more CO2 last year than Pakistan. Over that same period, the giant Sinopec, China Petroleum & Chemical, contributed more to global warming than Canada and Spain together. SAIC Motor Corporation, China’s large automobile manufacturing company, emits as much CO2 as Argentina.

These companies, comparable to entire countries, report a fraction of what they really pollute and have the support of the government to do so, inasmuch as they are state-owned. We now know more about them.

The bulk of the energy consumed by the industrial sector comes from coal plants, a technology that, according to official communications, will begin to be phased out in 2026 but is currently booming. In fact, emissions from burning coal grew 40 percent between 2010 and 2020, and have continued to grow in 2021, driven by the post-pandemic economic recovery.

That is in industry. In agriculture, likewise, the outlook is no better. Due to increasing demand as a result of rapid mechanization of production, energy use currently emits more CO2 than fertilizers. This is in addition to the methane produced by beef cattle and pigs, a greenhouse gas that is 25 times more potent than CO2. In 2020, China raised more than two-thirds of the pigs for human consumption in the world.

It should be highlighted, in this sense, that China’s lack of transparency regarding global warming is consistent with its foreign policy in general. China is a bully that cheats; that is its strategy. In trade, it manipulates the exchange rate, it violates intellectual property rights, and its labor and environmental regulations are sub-par, to say the least. Thus, it obtains unwarranted advantages, breaking the rules of reciprocity that govern the international trade regime.

As to global public health, the same is true. China has never shed light on the murky origins of the Covid-19 virus, or its collusion with the World Health Organization. Nor has it explained why flights between Wuhan and other Chinese cities were halted, while international flights continued. The pandemic spread in Europe from Bergamo, in Lombardy, while it slowed in China. And of course, its show of solidarity arrived shortly thereafter in the form of timely vaccines.

China replicates incentives not to cooperate; its self-perception as a hegemonic power presents countless challenges for the West. The Cold War occurred in the West, in Europe, and was characterized by an ideological conflict that was inherently European. There were collective decisionmaking mechanisms in both blocks, anchored in rules, pacts, and treaties that offered reassurances. Ultimately, it ended up being the most prolonged period of European peace in history.

This new Cold War exhibits features of a civilizational conflict, à la Samuel Huntington, although more intense and uncertain than in his “Clash of Civilizations.” Today there is no clear manual of instructions; thus, Western leaders appear perplexed and passive. President Joe Biden uttered a timid “China made a big mistake not showing up at the COP26.”

Yet this is no mistake, and the politburo does not think so either. China mistrusts the West, hence its non-cooperative behavior. The dilemma is that cooperation is necessary to meet the goal of 1.5 degrees Celsius, cooperation for which democracies are better prepared given the shared ground rules and values: accountability and institutions able to penalize free riders—that is to say, those who seek to reap the benefits of collective action against climate change without incurring the costs.

In short, democracy pollutes less than autocracy. Preventing global warming requires institutions that the planet’s biggest polluter does not have and rejects. The environmental agenda should focus its rhetorical firepower there. The problem is not in the West nor in the “global north,” a rather quaint but dear concept to today’s green youth. The problem is in the East.

Hector Schamis teaches at Georgetown University's Center for Latin American Studies. He has published books and articles on topics such as privatization and state reform, populism, authoritarianism, and democracy, as well as on US-Latin American relations.