Biden at COP26: China Must Lead 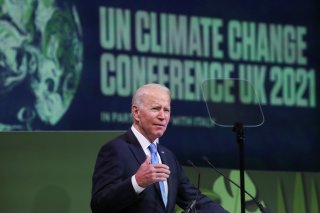 In his earlier, formal remarks, Biden cited his presence as an example of the United States’ return to global leadership after four years under President Donald Trump, whose “America First” policy approach was highly critical of international organizations. Trump, a climate change denier, was particularly hostile to climate agreements and withdrew the United States from the 2015 Paris Agreement in June 2017. Biden argued that that decision “sort of put [the U.S.] behind the eight ball” in fighting climate change.

Biden later contrasted his presence with Xi’s absence, suggesting that it displayed a lack of leadership in international affairs.

“The fact that China is trying to assert, understandably, a new role in the world as a world leader, not showing up? Come on!” the president said to reporters immediately prior to his flight from Glasgow and return to the United States.

“It … is a gigantic issue and they walked away,” he continued.

President Xi has not left China since the onset of the COVID-19 pandemic in Wuhan in late 2019. The Chinese leader instead provided a written statement to the conference, in which he called for greater international cooperation but offered no concrete policy details.

China, the world’s largest producer of carbon dioxide, has supported action against climate change and has generally adhered to international reduction targets. The country is slated to achieve carbon neutrality by 2060, according to the state-run CGTN network.

While Biden has spoken positively of improving the U.S.-China relationship, his administration has also bolstered international security agreements implicitly directed against Beijing, such as the U.S.-Japan-India-Australia “Quad.”

A significant diplomatic crisis also emerged in September after the United States agreed to arm Australia with nuclear submarines. While France, whose Naval Group defense conglomerate lost its contract to construct traditional submarines for the country, reacted angrily to the pact, it was also regarded as a counterweight against China, which experienced a falling-out with Australia in 2018.

Finally, as China has increased its rhetoric of reclaiming Taiwan, the island off its coast that operates as an independent country, Biden has publicly committed to defending it against a Chinese invasion, a policy that the U.S. government has deliberately remained ambiguous about since 1979. (The White House later clarified that Biden’s remarks had not changed official U.S. policy.)

Biden and Xi last spoke by phone on September 9, and the two leaders are also scheduled to hold a virtual meeting before the end of the year.