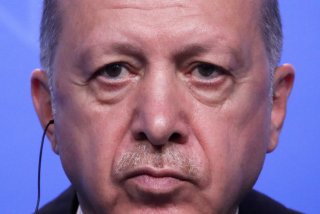 Turkish President Recep Tayyip Erdogan is caught in the midst of a steep economic downturn and souring ties with the United States. There is even a Turkish mob boss-turned-whistleblower on the loose, threatening to expose the links of Erdogan’s inner circle to the mafia and illicit financial transactions. Recent polls show voter support for Erdogan’s ruling Justice and Development Party (AKP) dwindling to as little as 27 percent, an all-time-low since the party’s rise to power in 2002.

Election anxiety is not a new phenomenon for Erdogan. In 2015, the strong performance at the polls of the pro-Kurdish Peoples’ Democratic Party (HDP) temporarily robbed the AKP of its parliamentary majority, briefly blocking Erdogan’s ambitions to replace Turkey’s parliamentary system with a presidential one that would give him enhanced powers. Four years later, when the HDP funneled Kurdish votes to opposition candidates in the 2019 municipal elections, AKP candidates lost major cities across Turkey.

The HDP’s disruption of Erdogan’s attempt to consolidate power pinned the party in the bullseye of an all-out crackdown. Over the past five years, Turkish authorities have detained, jailed, and probed thousands of HDP members, including party chairs, lawmakers, mayors, and regional officers. If an ongoing court bid to shutter the party succeeds, Erdogan will have disenfranchised six million pro-Kurdish voters in an attempt to stave off defeat at the ballot box in 2023.

The HDP is the latest incarnation in a long line of pro-Kurdish political parties that had to reinvent themselves following court-ordered bans. These HDP predecessors all faced similar accusations of being the political wing of the outlawed Kurdistan Workers’ Party (PKK), which has been waging an insurgency since the 1980s that has claimed over 40,000 lives and is designated as a terrorist organization by Turkey, the United States, and the European Union.

Erdogan is willing to bury Turkey’s democracy and rule of law for good if that’s what it takes to keep him in power. He is counting on the United States and the European Union to remain distracted, so they do not push back against his efforts to go after the opposition, which has a genuine potential to restore democracy and do it peacefully.

The HDP became a target following its historic success in the June 2015 parliamentary elections, when it won eighty seats by clearing the 10 percent national electoral threshold, the first pro-Kurdish party in Turkish history to do so. For the first time since 2002, the AKP lost its majority. The same year, Erdogan’s initiative for the peaceful resolution of the PKK’s forty-year insurgency came to a halt. Rather than an asset, pro-Kurdish sentiment had suddenly become a major liability.

In the aftermath of the violent but failed coup attempt of 2016, Erdogan unleashed a crackdown on the HDP based on the pretext that it was the political wing of the PKK, even though the PKK had nothing at all to do with the attempted coup. Turkish police in November 2016 detained fifteen HDP lawmakers, including party co-chairs Figen Yuksekdag and Selahattin Demirtas, on terrorism charges. Since the inception of the crackdown, Turkish authorities have detained some fifty lawmakers, arresting eighteen. Seven of them remain behind bars today, including Demirtas.

The crackdown on the HDP has intensified over the last two years following yet another ballot box setback for the AKP. In March 2019, the AKP and its coalition partner, the ultranationalist Nationalist Action Party (MHP), suffered an embarrassing defeat in municipal elections. The opposition bloc captured the mayor’s office in Turkey’s two largest cities, Istanbul and Ankara. Overall, it claimed victory in municipalities that are home to half the electorate and generate two-thirds of the country’s gross domestic product.

In Istanbul, Ekrem Imamoglu, the candidate of the pro-secular Republican People’s Party (CHP), surpassed Erdogan’s close confidant Binali Yildirim by a razor-thin margin of 13,000 ballots. Not wanting to lose a prestigious stronghold that offers lucrative spoils for his political clients, Erdogan demanded that the Supreme Election Council annul the first vote in Istanbul. However, Erdogan’s candidate lost again in the re-runs, this time by a margin of almost 800,000 votes, or about nine points.

Since its inception, the AKP has received significant support from Turkey’s Kurdish voters, especially from religiously observant ones, enabling it to win the country’s biggest urban municipalities, including Istanbul, in the 2004, 2009, and 2014 elections. In 2019, the HDP did not field a candidate in Istanbul. Instead, its leaders, including the party’s imprisoned former co-chair Selahattin Demirtas, voiced support for the CHP candidate, Imamoglu. This undermined the AKP’s efforts to court the Kurdish vote for Yildirim.

Altogether in 2019, the HDP’s mayoral candidates won sixty-five municipalities—eight provinces, forty-five subprovinces, and twelve smaller districts—in the predominantly Kurdish eastern and southeastern Turkey. In addition to mayoral victories, the party gained over 1,300 seats in municipal councils. Yet immediately after the results rolled in, the Supreme Election Council snatched six mayoral victories from the party and handed the offices to runners-up from the AKP. During the remainder of the year, the Erdogan government-appointed hand-picked trustees to replace elected pro-Kurdish mayors in thirty-two more municipalities. By the end of August 2020, the number climbed to forty-seven. As of today, the HDP holds only six of the sixty-five municipalities it won in the 2019 local elections. Turkish authorities have arrested thirty-seven HDP mayors in the process. Seventeen still remain in prison.

For all his insistence that he is a democrat, Erdogan has shown his contempt for Turkish voters’ actual judgment. With national elections fewer than two years away, he faces an urgent need to tilt the playing field, lest the AKP faces a much more damaging defeat.

No Rest for the HDP

As Erdogan’s approval rates taper off, the pressure on the HDP keeps on mounting. 2021 was one of the most injurious for the pro-Kurdish party. Last month, a violent attack on one of the party branches claimed a member’s life. In March, Turkey’s Islamist-ultranationalist ruling bloc stripped a leading HDP lawmaker of his parliamentary immunity and sent him to prison for retweeting a news article. Fifteen of his colleagues now face the same risk of losing their immunity and receiving prison time for imaginary offenses.

March 2021 kicked off with the arrest of prominent HDP deputy Omer Faruk Gergerlioglu. Erdogan’s ruling coalition stripped Gergerlioglu of his parliamentary immunity after the Court of Cassation upheld a guilty verdict against him on laughable terrorism accusations. The indictment pointed to Gergerlioglu’s retweeting of a news article calling for a peaceful resolution of the Kurdish conflict as evidence of engaging in terrorist propaganda. Turkey’s Constitutional Court on July 1 ruled for Gergerlioglu’s release, saying that his right of freedom and political participation had been violated. Seven other HDP lawmakers remain incarcerated. The HDP currently holds only fifty-five seats in the parliament out of the sixty-seven it won in 2018, thanks to Erdogan’s abuse of parliamentary and judicial proceedings.

On June 17, an armed assailant stormed the HDP’s offices in Izmir—Turkey’s third-largest province, located on the Aegean coast—and fatally shot party employee Deniz Poyraz. Thirty-eight-year-old Poyraz was the only member present at the time of the attack, but HDP leaders suspect that gunman Onur Gencer’s attack was a premeditated effort rather than an impulsive action. HDP co-chair Mithat Sancar said the attacker intended to carry out a massacre. On the day of the murder, HDP officials had planned a large party meeting which they canceled at the last minute. Gencer admitted that he had signed up for a language course located above the HDP’s offices to scout the building.

During police questioning, Gencer confessed that he “would have shot others too,” and that he had “dreamt of killing PKK members since childhood.” An autopsy report later revealed that Gencer had tortured Poyraz both before and after inflicting the fatal blow. Party leader Sancar pointed to government-led vilification of the HDP as the catalyst of Poyraz’s murder.

On July 14, a copycat shooting in the Marmaris subprovince of the Aegean province of Mugla marked the second armed attack on HDP in a month. The armed assailant opened fire on the HDP’s Marmaris building. The twenty-eight-year-old offender had attacked the party building in 2018 and was charged with damaging property. The HDP subprovince co-chair in Marmaris claimed the gunman had fired more than 100 shots during the attack.

Over the years, the Turkish government has systematically conflated the HDP with the PKK. Erdogan and his ultranationalist coalition partner Devlet Bahceli often refer to HDP members as terrorists. A jarring example of this came a mere few days after Poyraz’s death when Bahceli called the victim a “terrorist,” claiming that Poyraz was a PKK accomplice without any evidence.

Since the beginning of the crackdown on the HDP, Turkish authorities have detained some 16,500 party members and affiliates and arrested some 3,500, according to a report the HDP issued last year. Now Erdogan is seeking to deliver the death blow to the HDP.