Erdogan: Turkey and Israel Can Supply Gas to Europe 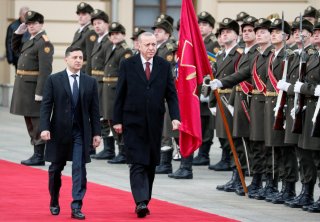 Turkish president Recep Tayyip Erdogan indicated on Friday that Turkey was willing to help deliver Israeli natural gas to Europe to decrease its reliance on imports from Russia.

"We can use Israeli natural gas in our country, and beyond using it, we can also engage in a joint effort on its passage to Europe," the president told reporters, indicating that the subject of energy cooperation between the two countries would be discussed between Turkish and Israeli diplomats in a series of upcoming meetings in March.

Turkey’s ties with Israel have been contentious in recent years. Ankara has traditionally supported the cause of the Palestinians, and the Erdogan administration has harshly criticized Israel in the past for alleged violations of Palestinian human rights. A diplomatic spat between Israel and Turkey led both nations to withdraw their respective ambassadors in 2018, and both positions remain vacant.

In spite of the ongoing Palestinian issue, however, Turkey has sought to improve its relations with its neighbors since 2020, and Erdogan announced earlier in the week that Israeli president Isaac Herzog would visit the country in mid-March.

“Now, God willing, these issues will be on our agenda with Mr. Herzog during [his] visit to Turkey,” Erdogan said, referring to potential natural gas cooperation between Ankara and Tel Aviv.

Herzog’s role in Israeli politics is largely ceremonial; the country’s prime minister, Naftali Bennett, and his cabinet wield executive authority. Erdogan has sought closer ties with Bennett as well, and the two leaders held a call in November, the first time that Turkish and Israeli leaders had spoken since 2013.

In addition to its detente with Israel, Turkey has also explored closer financial ties with the Kurds in northern Iraq, in spite of Ankara’s long-time suspicion of Kurdish separatist movements. On Wednesday, Erdogan met Nachirvan Barzani, the president of the semi-autonomous Iraqi Kurdistan region, to discuss Turkish purchases of Kurdish natural gas.

“We have now taken the Iraq issue on our agenda … There may be a supply on the natural gas side from Iraq to Turkey,” Erdogan said, noting that future talks would be held on the issue.

Although Europe has long had abundant access to cheap natural gas from Russia, concerns over political fallout from the ongoing Russo-Ukrainian crisis have led many European countries to rethink their gas supply chains. The United States is increasing its natural gas exports to Europe and has also leaned on Qatar, one of the world’s largest producers, to do the same.