Nord Stream Shows That Economics Must Align With Security 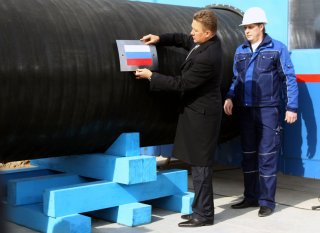 The state-owned Nord Stream 2 pipeline is designed to pump gas from Russia to Germany without having to transit through Poland or Ukraine. While Nord Stream 2 was completed in 2021, final certification from the German government is needed before it can begin operation. From Moscow’s perspective, bypassing two countries that it has tense relations with makes the system more secure. However, from the United States’ perspective, making Germany and the European Union even more dependent on Russian energy weakens NATO’s resolve and undermines its ability to deter or respond to a Russian invasion of Ukraine.

On January 13, the U.S. Senate voted fifty-five to forty-four in favor of the Protecting Europe's Energy Security Implementation Act. The bill, which was introduced by Sen. Ted Cruz (R-TX), would require “the imposition of sanctions with respect to entities responsible for the planning, construction, or operation of the Nord Stream 2 pipeline.” Though Cruz’s bill received majority support in the Senate, it did not pass because it lacked the sixty votes required to overcome a filibuster supported by the Democratic leadership and the Biden administration.

In 2019, Congress and the Trump administration imposed sanctions on the pipeline that temporarily halted its construction. Despite the success sanctions achieved in 2019, Sen. Robert Menendez (D-NJ), the Chairman of the Senate Foreign Relations Committee, aggressively opposed Cruz’s recent effort to expand sanctions on Nord Stream 2, arguing that the threat of sanctions is necessary to deter Russia. "[Russian president Vladimir] Putin wants to see Nord Stream 2," Menendez said. "If somehow it's killed before any potential invasion, he has one less reason not to invade Ukraine." In an effort to bolster deterrence, Menendez has offered the Defending Ukraine Sovereignty Act of 2022, which he says would impose “the mother of all sanctions” on Russia. By including sanctions on Russia’s finances, exports, and “extractive industries” in the bill, Menendez appears willing to take measures against the pipeline. The bill, however, has not yet been scheduled for a vote and is still being written in concert with a bipartisan Senate group that wants to convey to Moscow that U.S. leadership is united in opposing its aggression.

The Biden administration has also reportedly drawn up sanctions that are ready to be issued “when [Russian] tanks cross the border.” An administration official added that while the specifics of any sanctions package would depend on what actions Russia takes, they “have concrete actions that we are ready to hit the return key on." While President Joe Biden has himself threatened major sanctions on Moscow and voiced opposition to Nord Stream 2, he recently cast doubt on the power of sanctions as a deterrent. During his press conference on January 19, Biden said that he believes Russia “will move in” because Putin “has to do something.” Biden then undermined deterrence further by saying, “I think what you’re going to see is that Russia will be held accountable if it invades, and it depends on what it does. It’s one thing if it’s a minor incursion and we end up having to fight [within NATO] about what to do and not to do.”

White House press secretary Jen Psaki immediately attempted to walk back Biden’s words. In a statement released shortly after the press conference, Psaki claimed that “President Biden also knows from long experience that the Russians have an extensive playbook of aggression short of military action … and he affirmed today that those acts of Russian aggression will be met with a decisive, reciprocal, and united response.” The term “reciprocal” seemed to imply that Russia would hold the initiative and not have to worry about NATO escalation beyond Moscow’s expectations.

The key to NATO’s unity will be Germany’s response. A major argument against Senator Cruz’s bill was that because of Germany’s dependence on Russian gas, it might abandon NATO. Despite this argument, there are reports indicating that Berlin has told Moscow that the pipeline will not be certified if Russia invades Ukraine. In July, Germany agreed to “take action...to limit Russian export capabilities to Europe in the energy sector...designed to ensure that Russia will not misuse any pipeline, including Nord Stream 2, to achieve aggressive political ends by using energy as a weapon.” But that was easier to say before the prospect became real.

Ambiguity does not make for a strong deterrent. Would either the Biden administration or Menendez impose sanctions on the pipeline if Germany opposed them? Putin remembers President Barack Obama’s claim that the annexation of Crimea “would not stand” because of sanctions. But today, no one expects a Russian withdrawal from such a strategic territory just to have some annoying sanctions lifted.

Two crucial issues need to be addressed in the debate over sanctions. First, are sanctions meant to deter and punish Russia, or will they be used as part of a larger strategy aimed at changing the overall balance of power? During the Cold War, economic relations and sanctions were part of the United States’ larger calculations. And in the long run, it was the massive economic capabilities of the Western alliance that won the contest without it escalating into a direct conflict. The many advantages provided by economic superiority, including not just advanced technology and industrial capacity but a secure base of energy and resources, are what create real deterrence. Moscow must not feel that it can win future confrontations by threatening Europe’s economy and dividing NATO. Rather than merely being a pawn in a crisis, stopping the Nord Stream system is necessary for long-term security. Even if there is no invasion this time, the goal remains to reduce Russian influence in Europe and limit the economic benefits that Moscow can use to support its aggressive policies. Decoupling trade is a strategic move, not just a diplomatic ploy. Sanctions may not persuade a determined opponent to change course, but they can make it more difficult for them to mobilize the means needed to achieve their objectives.

The second issue that must be addressed is the ideology that led Sen. Rand Paul (R-KY) to break with the rest of his party during the recent vote on Cruz’s bill. While it does not seem to be playing much of a role in the current crisis, this ideology has been a recurring challenge that has caused considerable harm in the past. In a column for the American Conservative, the libertarian lawmaker raised the old banner of classical liberalism as if it were 1822 rather than 2022. He railed against sanctions of all kinds, even embracing the conspiracy theory that the U.S. oil embargo on Japan triggered the Pearl Harbor attack. He did not mention Tokyo’s aggression in China, which sparked the sanctions, or the long-standing belligerence and naval buildup that put U.S.-Japan relations on edge for decades. The United States has no obligation to provide a foreign regime with the means to carry out policies inimical to U.S. interests.

Paul argued that “history demonstrates that trade and interconnectedness between nations is a barrier to war.” This ideology led to some of the most absurd utterances ever made about foreign affairs when it was first presented as an alternative to what had transpired during the Napoleonic Wars. Thomas Paine, for example, declared that since “man is not the enemy of man,” all warships should be converted into cargo ships in order to promote trade (an erroneous ideology that I have formerly written on. However, in one sense, Moscow does hope that Nord Stream will make war less likely. But appeasement that is motivated by economic concerns is not peace.

Paul goes beyond ideology with his charge that opposition to Nord Stream 2 is “only superficially about national security” and is actually driven by “states that compete in the sale of natural gas.” Paul missed a major strategic point by taking the low road. As long as Europe needs to import energy, the source of Europe’s supply will always be a critical national security issue. The Biden administration is trying to find substitute gas supplies for Germany from both international and U.S. producers.

The real history of trade aligns with security alliances. Joanne S. Gowa, the former William P. Boswell Professor of World Politics of Peace and War at Princeton, made this her theme in Allies, Adversaries, and International Trade. She demonstrated how “power politics is an inexorable element of any agreement to open international markets, because of the security externalities that trade produces.... trade enhances the potential military power of any country that engages in it.” Trade with an ally makes both parties stronger, whereas trade with an enemy creates “a security diseconomy” that strengthens the enemy. The classical liberals were wrong. Economics should align with and support security, not contend with or undermine it. This fundamental fact must inform how the United States approaches Nord Stream 2 and European energy security as a whole.