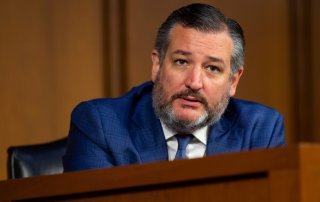 Fifty-five senators voted in favor of the proposal, including all but one Senate Republican and six Democrats, while forty-three Democrats and Republican Sen. Rand Paul (R-Ky.) opposed it. Although it secured a majority, the legislation fell five votes short of the sixty votes required to pass.

While Senate Democrats expressed their disapproval of the Russian government’s activities, the opponents of Cruz’s bill justified their votes by citing the existence of similar legislation proposed by Sen. Robert Menendez (D-NJ). Menendez’s bill would not immediately act against the pipeline but would sanction it and other Russian entities if the Kremlin launched a military intervention in Ukraine.

Opponents of the bill also cited the potential for divisions with America’s NATO allies, who largely share Washington’s foreign policy priorities but would benefit economically from cheap Russian gas.

Sen. Jeanne Shaheen (D-NH) argued that the legislation could “drive a wedge” between the United States and Europe. Shaheen claimed that sanctions could be particularly damaging to the United States’ relationship with Germany, where the pipeline is located.

Although the Biden administration has not opted to sanction the pipeline, it has vocally opposed it, arguing that it may provide Moscow with leverage over Europe’s foreign policy. U.S. allies in Eastern Europe have also opposed the pipeline, in part because its construction excludes them from transit fees for shipping gas through their territory in existing pipelines.

In advocating for his bill, Cruz claimed that Ukraine would “risk … getting wiped off the map altogether” if the pipeline went into effect.

The undersea pipeline was constructed between terminals in the Russian city of Vyborg and the German city of Greifswald via the Baltic Sea. The pipeline was built at a cost of roughly $11 billion and was completed in late 2021. However, it has not yet gone into operation due to delays in regulatory approval. If no sanctions are forthcoming from the United States, it is predicted that the first gas shipments will begin in mid-2022.