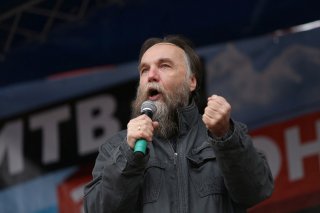 Russian authorities have accused “Ukrainian special services” of organizing the killing of Daria Dugina, a Russian journalist and the daughter of prominent ultra-nationalist philosopher Aleksandr Dugin.

"As a result of urgent detective measures, the federal security service has solved the murder of Russian journalist Darya Dugina, born in 1992," Russia’s Federal Security Service (FSB) claimed on Monday. The FSB said the murder was committed by Ukrainian citizen Natalia Vovk. Vovk and her daughter, Sofya Shaban, were allegedly seen at the “Tradition” music festival in Russia, which was attended by Dugina shortly before her death. Dugina left the festival in a Toyota Land Cruiser Prado that Russian authorities say was rigged with a remote-controlled explosive. She died at the scene after her car exploded on a highway near the village of Bolshiye Vyazomy in the Moscow region.

Vovk and Shaban subsequently escaped through Russia’s Pskov region to Estonia, according to Russian authorities. Vovk rented an apartment in Moscow in the same building as Dugina and allegedly surveilled her in a Mini Cooper car. The FSB claimed Vovk entered Russia through territory controlled by the Russian-backed separatist Donetsk People’s Republic (DPR) in Ukraine. The FSB has released unverified footage purporting to show Vovk driving into Moscow, entering the apartment building where Dugina lived, driving the Cooper Mini in Moscow, and leaving Russia in the same vehicle.

Journalists with state-affiliated Russian media outlet RIA Novosti claimed to visit Vovk’s former residence in Mariupol, a Ukrainian port city that fell to Russian and Russian-aligned forces earlier this summer. A person identified by RIA as her cousin “confirmed” that Vovk had an office job in Ukraine’s military, adding that she left for Europe one month ago.

Russian law enforcement officials told state news outlet TASS that they will be demanding Vovk’s extradition, though they did not immediately confirm that she is currently in Estonia. Estonia’s prosecutor general’s office said it “has not received any requests or inquiries from the Russian authorities on this topic.”

The Kremlin accused Ukraine’s secret services of masterminding the plot, a claim denied by top Kyiv officials. Moscow authorities rebuffed earlier claims that Dugina was killed in the midst of an attempt to murder her father and instead framed her death as a targeted assassination. "Those who plotted the murder of Darya Dugina studied her daily routine and habits. When they set off the explosive device, those who remotely exploded the car were certain that Dugina was alone. Her father was not the killers’ target," an anonymous Russian law enforcement official reportedly told TASS.

Daria Dugina was a Russian journalist and political commentator who espoused hawkish views on the Ukraine conflict and Russia’s relations with the West.

Russian president Vladimir Putin signed a decree on Monday to bestow the Order of Courage, a vaunted state decoration, to Dugina “for courage and dedication while performing her professional duty.”