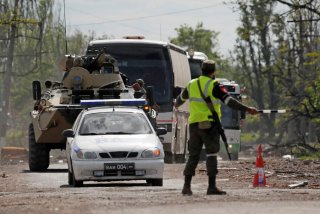 The Azovstal garrison has surrendered to Russian forces, ending a bloody eighty-two-day standoff that has taken on a symbolic significance for both sides.

Hundreds of combatants were evacuated on Monday from the besieged Azovstal metallurgical plant in the southeastern port hub of Mariupol. Ukraine’s deputy defense minister, Anna Malyar, said fifty-three wounded soldiers were taken to a hospital in Novoazovsk, a town controlled by the breakaway pro-Russian Donetsk People’s Republic (DPR), and another 211 Ukrainian personnel were taken to the DPR-controlled village of Olenivka.

“Ukraine needs Ukrainian heroes alive,” President Volodymyr Zelensky said in his nightly address. “We hope that we will be able to save the lives of our guys. Among them are the seriously wounded. They are being provided with medical aid.”

The General Staff of Ukraine's Armed Forces did not use the word “surrender” in a statement, instead announcing that the "the 'Mariupol' garrison has fulfilled its combat mission.” Kyiv hailed the defenders—composed in large part of the ultranationalist Azov Battalion—as heroes for holding up thousands of Russian troops that could have been deployed elsewhere in Ukraine’s eastern Donbas region.

Commander Denys Prokopenko said in a message recorded from inside Azovstal that the defenders’ decision to lay down their arms was approved by Ukraine’s senior military leadership. "The main thing is to realize all the risks, is there a plan B, are you fully committed to that plan which must allow for fulfilling the assigned tasks and preserve the lives and health of personnel?" he asked.

“This is the highest level of overseeing troops. All the more so when your decision is endorsed by the highest military command,” Prokopenko said.

Russia’s Defense Ministry has previously accused the Ukrainian government of forbidding the Azovstal garrison from surrendering.

“After their condition stabilizes, we will exchange them for Russian prisoners of war,” Ukrainian deputy prime minister Iryna Vereshchuk said Tuesday, according to the Washington Post. But Moscow has other ideas. Vyacheslav Volodin, speaker of the Russian State Duma, said any Azov Battalion fighters among the evacuees should not be exchanged for Russian prisoners of war and would instead stand trial in Russia over alleged war crimes. Anatoly Wasserman, a member of the Duma, introduced a bill that would make it illegal to exchange Azov Battalion members for Russian prisoners. “It is clear that an exchange would be declared by the collective west as a Ukrainian victory,” Wasserman said.

Russian politician Leonid Slutsky, one of the lead negotiators in the sputtered peace talks between Moscow and Kyiv, said the Azovstal garrison's fighters should receive the death penalty. “They do not deserve to live after the monstrous crimes against humanity that they have committed and that are committed continuously against our prisoners,'' he said, as per Reuters.