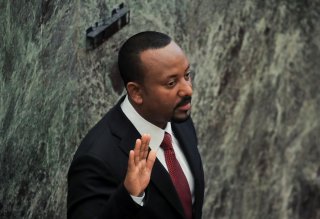 The United Nations announced on Tuesday that sixteen members of its Ethiopian staff had been arrested in Addis Ababa.

UN spokesman Stephane Dujarric told reporters that the organization was “actively working” with the Ethiopian government to release the staffers taken prisoner. According to Dujarric, six other UN detainees had already been released.

“Thus far,” Dujarric said, “as far as I know, no explanation [has been] given to us on why these staff members are detained.” He claimed, however, that UN officials had visited the detainees and ensured that their conditions were livable.

Ethiopia’s government has remained silent on the affair, concentrating instead on its deepening war with the rebel forces bearing down on the capital from the country’s north. The UN has run afoul of Ethiopia before; in September, the administration of Prime Minister Abiy Ahmed expelled seven high-level UN officials from the country after accusing them of “meddling” in the country’s internal affairs.

A point of contention between Ethiopia and the UN has been Addis Ababa’s extreme methods of fighting the northern rebels. Among other restrictions, Ethiopia has instituted a news blackout and prevented humanitarian aid deliveries to Tigray, the northern province in revolt against the central state.

The State Department expressed its concern over the ongoing crisis, with spokesman Ned Price commenting that it would “condemn arrests of UN staff members” if the reports were confirmed.

Price indicated that the State Department believed the arrests had been caused by ethnic suspicion and that the sixteen arrested UN officials were all ethnic Tigrayans. “Ethiopian government security force harassment and detention on the basis of ethnicity is completely unacceptable,” he said.

Price, however, was careful to “equally” condemn the guerrilla war being conducted against Addis Ababa by the Tigray People’s Liberation Front (TPLF). This insurgency, though initially lost ground in late 2020, has since pushed outside of Tigray, aided by low morale among Ethiopian forces and aid from some Oromo, another significant Ethiopian ethnic group that has long harbored secessionist elements.

Price called on all parties in the conflict to “cease such activities and respect human rights and the rule of law.”

Earlier in the month, the Abiy administration announced a six-month state of emergency and has reportedly used the emergency powers gained in that declaration to detain ethnic Tigrayans without trial.