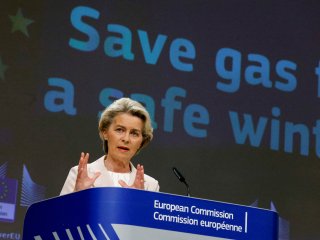 The leadership of the European Union (EU) is seeking a price cap on Russian gas as part of a package of emergency measures to contain soaring energy prices into the winter months.

“We aim at lowering the costs of gas. Therefore, we will propose a price cap on Russian gas,” read a statement from European Commission President Ursula von der Leyen. “We all know that our sanctions are deeply grinding into the Russian economy, with a heavy negative impact. But Putin is partially buffering through fossil fuel revenues … we must cut Russia's revenues, which Putin uses to finance his atrocious war in Ukraine.”

The proposed price cap is part of a broader set of emergency measures that also includes limitations on energy use during peak hours and programs to redistribute the “massive profits” of fossil fuel companies among “vulnerable households and vulnerable companies.”

Officials of EU member states are expected to meet in Brussels on Friday to discuss a wide range of proposed options to mitigate energy costs. European leaders remain divided on the particulars of a potential cap on Russian gas. The Baltic countries and Portugal have been vocal proponents of the plan, while other member states have reportedly expressed concerns that the cap would further exacerbate Europe’s mounting gas shortages. “The devil is in the details,” a senior EU diplomat told the Washington Post.

Belgian energy minister Tinne Van der Straeten told Reuters that a cap on Russian gas imports would not substantially impact consumer energy prices. "There is not that much Russian gas coming to Europe, so I don't see the added value of that," she said. Van der Straeten instead proposed an EU-wide dynamic price cap linked to Asian markets. "We have to intervene at wholesale market level … so that it can have effect on energy bills," she said.

The Friday meeting will come shortly on the heels of Russian gas giant Gazprom’s decision to indefinitely suspend the Nord Stream 1 pipeline to Europe, with top Russian officials blaming Western sanctions on Gazprom’s inability to properly service parts of the pipeline. “Certainly, the very sanctions that prevent the units from being serviced … it is these sanctions that Western states have imposed that have brought the situation to what we are seeing now,” Kremlin spokesman Dmitry Peskov claimed.

Russian president Vladimir Putin said Moscow will not sell energy products to any country that implements a price cap mechanism. “Besides everything else, there are contractual obligations. Is someone going to make political decisions that go against the contracts? Then we simply won’t honor the contracts. We won’t supply anything if it goes against our interests, economic, in this case,” he said at an economic forum in Vladivostok. “We will not supply gas, oil, coal, heating oil—we will not supply anything.”