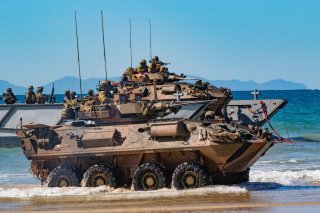 U.S. marines, soldiers, sailors, and airmen recently concluded a combined arms exercise in Australia with their Australian counterparts this month, highlighting Washington and Canberra’s increasingly tight relationship and mutual concern about the future of the Indo-Pacific region.

The exercise, known as KOOLENDONG 22, focused on expeditionary advanced base operations and “challenged the team to command and control the force across massive distances, multiple locations, and difficult terrain,” according to a United States Marine Corps press release.

“We will have U.S. Marines, Sailors, Soldiers, and Airmen alongside ADF soldiers and personnel conducting live and non-live-fire, and command and control, in Darwin, Mount Bundey, Broome, Curtin, and Yampi, across hundreds of miles of air, land, and sea lines of communication,” said Col. Chris Steele, the Marine Air-Ground Task Force commander.

“In my mind we always need to be ready to fight alongside our Australian allies and our joint partners, and KOOLENDONG 22 provided us the opportunity to practice just that,” Colonel Steele explained.

In conjunction with their Australian counterparts, the U.S. Marine Corps transported “hundreds of personnel and equipment pieces from the Northern Territory to Western Australia, encompassing a distance of over 1,000 kilometers (650 miles),” the service’s press release explained.

It added that “MRF-D utilized various air, land, and sea methods to conduct logistics throughout the exercise, including a U.S. Army logistics support vessel from the 8th Theater Sustainment Command, and Royal Australian Air Force C-17 Globemasters. The distance and terrain forced MRF-D to be creative, flexible, and detailed in the overall logistics plan, which replicated a plan applicable to potential future operations across the Indo-Pacific.”

“This annual exercise allows the ADF to rehearse with the US Marines in a combined arms littoral combat scenario,” said Col. Marcus Constable, the commander of Headquarters, Northern Command. “KOOLENDONG strengthens the US-Australian relationship, advances and validates USMC-ADF interoperability and demonstrates preparedness to respond to a regional crisis.”

Relations between the United States and Australia have recently become tighter. In addition to the annual cooperative exercises with Australia, Canberra is also a partner in the U.S.-led Joint Strike Fighter program, the initiative that yielded the world’s most prolific fifth-generation stealth fighter, the F-35.

Perhaps more importantly, however, the United States and the United Kingdom also gave Australia access to the crown jewels of their nuclear deterrence triad: nuclear-powered submarine technology. Though Australia is not pursuing nuclear weapons, operating even a small fleet of nuclear submarines would significantly augment the position of the United States and other nations that are concerned with China’s revanchist intentions in the Pacific region.

Though perhaps not revolutionary, the United States' relations with Australia will become tighter over concerns about China’s intentions in the Indo-Pacific. The KOOLENDONG 22 exercise is strong evidence of the closeness of that relationship.