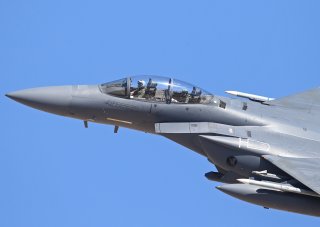 Air Force F-15C Eagles are now able to detect, track, attack and destroy enemy air targets with greater precision, image fidelity and weapons guidance due to the integration of a technology called the Legion Pod.

The Legion Pod is an infrared search and track (IRST) technology. It appears to incorporate the latest technological maturation related to key targeting systems integrated onto U.S. Navy F/A-18 Hornets years ago. IRST is, among other things, particularly well suited to operate in an electromagnetic warfare environment, which means its networking systems are hardened against enemy jamming attempts. The Legion Pod’s targeting reach expands beyond the standard aperture of an electronically scanned radar by using a system referred to as an “out-of-band” sensor, meaning it employs detection methods outside of standard radar detection bands.

Electronic warfare strikes could target communications systems for F-15C Eagles in terms of confirming key targeting data and connecting with other battlefield “nodes” and also, perhaps of even greater consequence, target some of the radio-frequency-reliant guidance systems used by air-launched weapons such as an AIM-9x Sidewinder or AIM-120D AMRAAM missiles. Sustaining radar detections and weapons guidance amid an electronic warfare attack would seem to be increasingly vital as electromagnetic systems become increasingly sophisticated. Much of the specifics related to how IRST functions within the spectrum are unavailable for security reasons. But that has not stopped major defense industry players from working with the military services on countering electronic warfare attacks in a variety of key respects. One technique is referred to as “frequency hopping,” a method through which a radio-frequency-reliant guidance system can adjust from one frequency to another within the spectrum in the event of jamming, essentially finding clearer or more transmittable bands to utilize.

Part of IRST’s survivability relates to the fact that it is a passive sensor, meaning it does not emit a signature or electromagnetic signal which can be tracked by enemy sensors, yet the technology does search for key heat signatures within a given threat envelope. The Air Force has made some progress integrating the IRST onto the F-15C Eagle. Recently, the military service succeeded in shooting down a target in a live-fire missile test using IRST.

“This successful live missile test is significant because an F-15 equipped with an IRST-cued AIM-120 allows us to achieve detection, tracking, targeting, weapons employment, and verification of an intercept without being dependent upon RADAR energy,” Major Brian Davis, 85th Test and Evaluation Squad chief of air-to-air weapons and tactics, said in an Air Force press statement. “It’s also not susceptible to radiofrequency jamming or a target’s low observable design.”