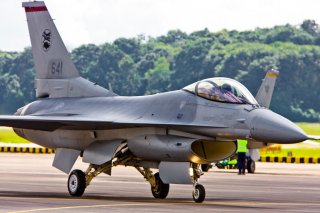 On Monday an F-16C Fighting Falcon assigned to the 49th Wing crashed during landing at Holloman Air Force Base west of Alamogordo, New Mexico. The U.S. Air Force announced that the pilot – who has not been named – successfully ejected and was being treated for minor injuries.

An investigation conducted by a board of qualified officers is already underway to determine the cause of the incident, and the Air Force announced that additional details will be released as they become available.

The F-16C Fighting Falcon remains in service with nations around the world, a testament to what is easily among the world's most successful, combat-proven multi-role jet fighters. The F-16C was developed as part of the improvement program of the original F-16A, a single-seat model that first flew in December 1976. It is used by active Air Force units and by many Air National Guard and Air Force Reserve units.

The 49th Wing hosts the 54th Fighter Group's F-16 Fighting Falcon pilot training missions. F-16C/D Fighting Falcons have operated at Holloman Air Force Base since 2014. Construction of the base began in February 1942, shortly after the United States entry into the Second World War. It was renamed in 1948 after Col. Holloman, a pioneer in early rocket and pilot-less aircraft research.

Fourth Crash in As Many Months

So far 2020 hasn't been a good year for the U.S. Air Force – Monday's crash marks the fourth fighter jet to crash in as many months, and follows last month's tragic loss of an F-15C Eagle and its pilot from the 48th Fighter Wing at RAF Lakenheath in Suffolk, England. The aircraft crashed on a training mission, and the pilot was confirmed deceased.

The cause of that crash is still unknown.

In May the U.S. Air Force lost both an F-22 Raptor and an F-35 Joint Strike Fighter in two unrelated crashes, both of which were based at Eglin Air Force Base in Florida. The F-35A Lightning II was assigned to the 58th Fighter Squadron when it crashed upon landing the F-16 at the base. The mission of the squadron, which is nicknamed the "Gorillas" is to train flight crew and maintainers on the Lockheed Martin-built aircraft. The F-22, which was part of the 325th Fighter Wing, crashed about 12 miles northeast of the base.

Fortunately, neither pilot in those crashes was killed, but the loss of those fighters has been described as a staggering financial loss for the Air Force and could exceed a quarter of a billion dollars – highlighting the extreme cost of the two advanced aircraft platforms.

These four most recent incidents follow a May 2019 crash of an F-16 into a warehouse near March Air Reserve base in Perris, California. The pilot in that incident was able to eject before impact, while a small fire that broke out was quickly contained. That was the previous most recent "hull-loss" accident involving the F-16 aircraft, and that accident was the result of a pair of hydraulic pressure valves being improperly installed on the jet.