F-22 Raptors Head to Poland to Put Russia on Notice 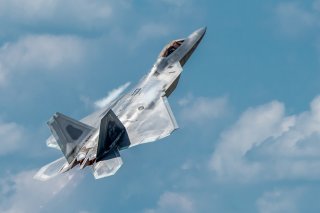 The U.S. Air Force is now deploying F-22 Raptors to Poland to fly alongside F-35 fighters in support of the deterrence mission on NATO’s eastern Flank.

Twelve F-22 Raptors will arrive to support NATO Allied Air Command at the 32nd Tactical Air Base in Lask, Poland, for what an Air Force report calls an “air shielding” mission. This is notable because, in addition to being thought of by many as the best air-to-air supremacy fighter in the world, the F-22 also has substantial ground attack capabilities as well.

In fact, F-22 fighters were deployed to attack ISIS in 2014, in what was largely a ground attack and “aerial quarterback” sensing and targeting mission. With this in mind, the F-22 could also function in critical ways to hold enemy ground air defenses at risk. Certainly, an F-22 fighter could use its stealth and speed to evade detection in order to fire precision air-to-ground weapons at enemy ground locations, especially surface-to-air missile systems. In this capacity, the air shielding mission could also function defensively as a deterrent against ground-launched enemy rockets and missiles.

The Air Force says the air shielding mission “is designed to increase the air and missile defense posture along the eastern flank of NATO’s alliance and is purely a defensive mission to shield and protect allied territory and populations and is a key component of NATO’s Deterrence and Defense posture.”

It is not surprising that the Air Force report would highlight “defensive” in its mission description, as placing fighters close to the Russian border is likely to make the Kremlin very nervous. While the Pentagon certainly does not want to signal any kind of offensive strike, the F-22 Raptor is known as a “first-to-attack” weapon. This capability could certainly contribute to NATO’s deterrence posture in “defensive” missions by ensuring that long-range rocket and missile launch sites could quickly be destroyed should Russia contemplate attacking NATO. Russia’s long-range capabilities have caused issues for Ukraine, as it has not had the air superiority necessary to destroy Russian rocket and missile launchers and has therefore been victim to countless missile and rocket attacks on civilian areas.

Should U.S. F-22 and NATO F-35 fighters establish air superiority following a Russian attack—something quite likely given the small number of fifth-generation stealth fighters operated by Russia—those launchers and other ground targets could quickly be eliminated from the air. The deployment may be intended to remind Russia of that fact.