Raptors on Patrol: How F-22s Are Bolstering Europe’s Eastern Flank 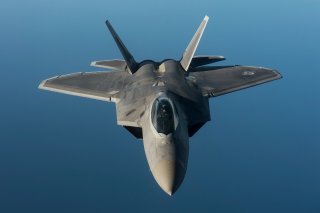 In a show of solidarity with the United States' NATO allies in Europe, the U.S. Air Force sent a dozen of its best fighter jets to Poland to reassure the alliance and to deter any potentially nefarious Russian activity.

As part of NATO’s plan to bolster its collective defense posture, the 90th Fighter Squadron will take over the mission from the Vermont Air National Guard’s 158th Fighter Wing, which has been executing the coalition’s Air Policing mission since they arrived in theater on May 2, 2022.

The F-35 Lightning IIs of the 158th FW completed their 3-month rotational deployment at Spangdahlem Air Base, Germany, in support of NATO’s enhanced Air Policing mission along the Eastern flank and returned to Vermont on Aug. 3, 2022.

Though the F-22’s origin story begins in the early 1980s during a time of high tension during the Cold War, the Raptor today is arguably the world’s stealthiest fighter jet. Very little expense was spared during the F-22’s development; consequently, the jet sacrifices very little regarding radar mitigation.

The U.S. Air Force statement explained that the F-22 Raptor is “a critical component of the global strike Task Force, and designed to project air dominance, rapidly and at great distances to defeat threats. A combination of sensor capability, integrated avionics, situational awareness, and weapons provides first-kill opportunity against threats.”

It added that the Raptor “possesses a sophisticated sensor suite allowing the pilot to track, identify, shoot and kill air-to-air threats before being detected. It cannot be matched by any known or projected fighter aircraft, making it a highly strategic platform to support NATO Air Shielding.”

Though Russia possesses a not-insignificant air force, Moscow’s fighters would be unlikely to best NATO jets, especially the F-22 Raptor. Combined with the substantial F-35 fleets that make up NATO allies’ air forces, the Alliance can rest easy, despite Russian opportunism.