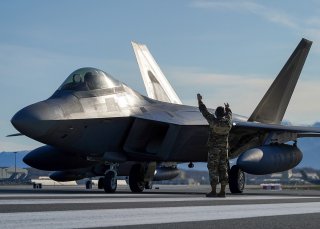 Over twenty years after its introduction, the F-22 Raptor remains one of the most agile fighters in the U.S. Air Force (USAF) roster.

A short clip, taken from an F-22 demonstration team practice session earlier this year, captures the maneuverability of the F-22 in stunning detail.

The clip opens with the pilot and demo team commander, Major Joshua Gunderson, in the midst of a power loop, followed by a series of rapid rolls and spins.

The choreography is remarkably tight, but what really sets this video apart is how beautifully shot it is; a consistently high frame rate and superb stabilization work convey Gunderson’s movements with such fluidity that they almost appear computer-generated. Rest assured, the footage is quite real and comes courtesy of photographer Mark Fingar, who also posted a video of Gunderson performing a Herbst Maneuver later that week. Fingar’s Instagram page is saturated with similarly high-quality aerobatics content.

Designed with a dual focus on stealth and super-maneuverability, the F-22 phased out the aging McDonnell Douglas F-15 Eagle in 2006 to become a mainstay of American aerobatics. The Raptor derives its agility in no small part from its excellent thrust ratio and 2D thrust vectoring nozzle, granting increased maneuverability in pitch movements. In keeping with its stealthy frame, the F-22 does not utilize 3D thrust vectoring—a type of nozzle design that enables engine thrust in all directions as opposed to only up and down. Though a major boon to maneuverability, 3D thrust vectoring requires a round, relatively exposed exhaust system that compromises observability and makes for a less potent stealth solution.

As explained by F-22 program director Orlando Sanchez Jr, the crucial ingredient behind the F-22’s maneuverability is the interaction between its sophisticated control system and its two Pratt & Whitney F119-PW-100 turbofan engines:

“The power of those engines, coupled with a thrust vectoring system that is part of the flight controls, give the F-22 a tremendous amount of maneuverability. It helps the aircraft get above the speed of sound and then sustain that speed. This provides a tactical advantage because minutes can matter getting from point A to point B,” Sanchez noted in a recent interview.

There is little question that the F-22’s large suite of maneuverability-informed design decisions makes it truly shine in an airshow format, but the Raptor has distinguished itself as a no less potent—even if quite expensive—candidate for high-intensity interception, escort, and combat sortie missions. USAF plans on flying the F-22 well into the 2060’s, though not without a suite of armament and sensor upgrades to be rolled out over the coming years. These updates include, but are not limited to, LINK 16 integration to facilitate real-time “collaborative targeting” and the addition of AIM-120D Medium-Range Air-to-Air Missiles.

The 14-person strong F-22 demonstration team is stationed at Langley Air Force Base in Virginia, and has been led by Gunderson since January of this year. The demo team made waves across the defense news sphere in 2019 with a viral video showing the inside of the F-22 cockpit in unprecedented detail.

The team’s 2020 performance schedule, current as of July 16, can be found here.