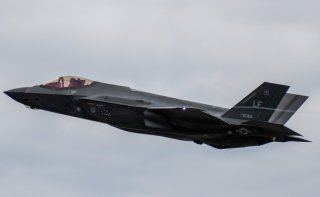 According to Finland’s Defense Ministry, the northeastern European country is expected to purchase as many as sixty-four F-35A Block IV fighters—reportedly outfitted with the unique drag chute system that can also be found on Dutch, Belgian, Danish, and Norwegian F-35s—as part of a $9.4 billion deal.

“It was a tough race,” Finnish defense minister Antti Kaikkonen reportedly said in a press conference announcing the decision. Lockheed Martin competed for the tender with Boeing’s F/A-18E/F Super Hornet, Eurofighter Typhoon, Saab Gripen E, and Dassault Rafale. Nevertheless, the F-35 appeared to beat its opponents handily—the fighter scored 4.47 on the capability test, with the next top-performing contender receiving only 3.81 points. "When comparing military performance, the F-35 best met our needs," Kaikonnen added. According to the Defense Ministry, the Lightning II scored highest in development potential and cost-effectiveness. “The F-35 was the cheapest in terms of purchase price…” read the Defense Ministry statement. “The operating and maintenance costs of the system are below the set annual cost limit of 254 million Euros [around $286 million at the current rate of exchange]. The operation and lifecycle development of the F-35 is possible with the resources of the Defense Forces. None of the bids were significantly cheaper in terms of operating and maintenance costs.” The fighter also scored highest in the security of supply category—Lockheed and the U.S. government worked closely with Finland to ensure a robust domestic service and maintenance network, as well as replaceable assemblies under emergency circumstances.

Finland fields a fleet of about sixty F-18 Hornets, which it aims to start phasing out from 2027 onwards. "The F-35 will provide Finnish industries unique digital capabilities that leverage fifth-generation engineering and manufacturing," said Bridget Lauderdale, Lockheed Martin's vice president and general manager of the F-35 programme. "The production work will continue for more than 20 years, and the F-35 sustainment work will continue into the 2070s.” The procurement, which includes weapons, maintenance service, and training until 2030, will also involve the construction of hangars and provision of equipment.

Finland’s decision settles one of the last open fighter procurement competitions in Europe, with Helsinki becoming the fourteenth nation to ink a contract for the F-35. In June, Switzerland announced plans to acquire thirty-six F-35 fighters. The F-35 partner program likewise includes Australia, Belgium, Canada, Italy, Japan, Denmark, the Netherlands, Norway, and the United Kingdom, encompassing a large swathe of the democracies traditionally referred to as the “free world.”