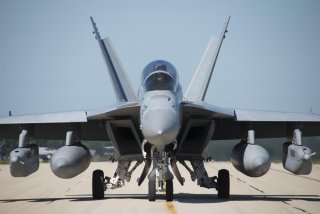 Described by Boeing as “the most networked and survivable F/A-18,” the Block III revision of the Super Hornet includes an advanced cockpit display system and a new adjunct processor that the manufacturer claims will increase the pilot’s situational awareness. This version of the Super Hornet brings two advanced technologies, Distributed Targeting Processor-Networked (DTP-N) and Tactical Targeting Network Technology (TTNT), to improve the fighter’s networking potential and data link capabilities. The Block III units are rated for 10,000 flight hours, a substantial improvement over the 6,000 flight hours of the  F/A-18E/F’s previous revisions. The plane’s open mission system architecture can streamline and expedite the pace of future upgrades whilst promoting interoperability and supplier competition. The Super Hornets’ latest revision likewise comes with design improvements to help reduce the fighter’s radar-cross section (RCS), as well as the ability to carry an infrared search and track (IRST) sensor.

“We invested in Block III technology and developed the capabilities in partnership with the U.S. Navy to meet its emerging requirements,” said Jen Tebo, Boeing vice president of F/A-18 and EA-18G programs. “The hardware upgrades are complete. Today we are maximizing the open hardware and software and developing the apps to keep Block III ahead of future threats. We are giving Navy pilots the tools to make the fastest and most informed decisions possible now and in the future.”

The continued delivery of Block III Super Hornet to the U.S. Navy comes amid Boeing’s ongoing efforts to expand the fighter’s presence in foreign markets. Switzerland chose the F-35 over the Super Hornet in July as part of a $6.5 billion procurement search, but Super Hornet remains an import contender for Canada, Finland, and Germany.

The F/A-18E-F Super Hornet was conceived in the late 1990s as an advanced iteration of the McDonnell Douglas F/A-18 Hornet fighter and attack (F/A) aircraft. The Super Hornet is larger than its Hornet predecessor, carrying around thirty-three percent more internal fuel. The fighter likewise boasts a greater operational range and maximum payload capacity. The Super Hornet supports a diverse array of air-to-air and air-to-ground missiles, as well as guided and unguided bombs, spread across an impressive eleven hardpoints. With over 550 Block II F/A-18’s currently active, the Super Hornet forms the backbone of the U.S. Navy’s carrier air wing and is projected to remain in service for decades to come.

Boeing won a $4 billion contract in 2019 to deliver seventy-eight new Super Hornets to the Navy, at a pace of two fighters per month through the end of the calendar year 2024. “We are excited to see new production deliveries rolling off the line in St. Louis, and are eagerly watching as the jets continue through developmental and operational test programs, said F/A-18 & EA-18G Program Office manager Capt. Jason Denney. “Our F/A-18 team continues to test, refine and improve the program, ensuring we deliver the most lethal, reliable, and sustainable strike fighter to meet the fleet’s needs.”  Boeing additionally plans to upgrade all of the Navy’s current Block II Super Hornet models to the Block III standard through the mid-2030s.