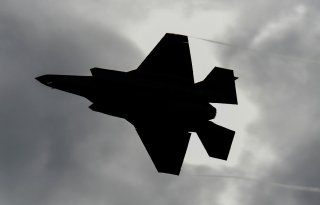 Despite the continued debate about the F-35 procurement strategy, costs, 5th-generation technology, and force size, the Air Force continues to stand firm in its support for the F-35.

Air Force Chief of Staff Gen. Charles Brown recently told Congress something he has said before, with the exact same words: "The F-35 is the cornerstone of our fighter fleet.”

Brown said this in the context of being questioned by members of Congress as to why additional numbers of F-35s were not placed on the “unfunded priority list,” a typical key portion of the military services’ budgets expressing the hope that the mark-up or conference process through which lawmakers finalize the budget may find funding for them.

The Air Force budget does ask for forty-eight F-35s, as part of a broader eighty-five-plane multi-service F-35 buy to include fifteen F-35Cs and seventeen Marine Corps F-35Bs.

“I'm sure there's some reason that we did not have more on our unfunded list this time as we have in the past,” Inhofe asked Brown. Other than reiterating very strong support for the future of the F-35 program, Brown did not elaborate in detail as to why more of the aircraft was not on the unfunded list.

There is certainly much to consider, as there has been an ongoing debate about F-35 numbers, sustainment costs, and budget constraints among members of Congress in recent months, with some members calling for a substantial cut. Some of the particulars about F-35 budget specifics are likely to emerge once the Congressional House and Senate Armed Services Committees do their budget mark-ups. Items reduced in various mark-ups are often put back during conference meetings and the deliberation process.

The actual price tag of the jet, particularly as production continues, continues to drop significantly, and there are many efforts to develop fleet-wide protocol and upgrades to ensure lower-cost sustainment. As more time goes by with ongoing F-35 production, more aircraft get built and corresponding expertise with manufacturing continues to evolve.

While many have made the point that the performance of the F-35, which includes an ability of one aircraft to perform the mission objects which typically require large numbers of 4th-generation platforms, Inhofe also raised the point that costs per plane can go down substantially as numbers increase."

“Mr. Kendall testified in his confirmation hearing to the Secretary of the Air Force that the way to bring down sustainment costs to procure more F-35s,” Inhofe said.

Brown went on to explain that there is also a substantial international commitment to the F-35 which continues to expand as new aircraft arrive in Denmark, Israel, Norway, and other partners to include a huge F-35 Japanese purchase now in development.

“I personally engaged with many of our allies and partners that are flying the F-35 — and I know they feel the same way about the F-35,” Brown told the Committee.

Inhofe’s concern was just as much for the overall number of fighter jets in the force, as budget proposals request what he believes is simply too low a number.

“China will have more stealth fighters in the Western Pacific than the U.S. in 2025. That's just one of the consequences of our very, very low number of aircraft procurement since 1990,” Inhofe said.