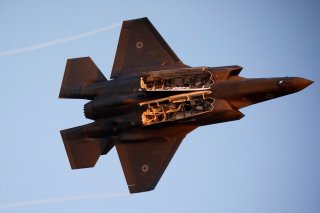 An airborne F-35 jet recently sent targeting specifics to a ground-based Patriot missile fire control system to track and destroy an approaching cruise missile threat. This small feat shows that the Pentagon has taken a step closer to realizing its multi-year vision for cross-domain combat connectivity.

The event took place as part of a live-fire demonstration of the Army’s Integrated Battle Command System (IBCS) of networked missile defense “nodes.” These nodes actualize the Pentagon’s longstanding goal to operate a multi-domain, integrated network of “meshed” nodes dispersed throughout an area of operations to share threat data, process and track key information and massively reduce sensor-to-shooter time for commanders facing threats in war.

It is not surprising that an F-35 jet could function in this capacity as an aerial relay node, given the range and sensitivity of its onboard sensors.  Incoming F-35 sensor data is organized by artificial-intelligence-enabled high-speed computing which “fuses’ otherwise disparate pools of combat critical data. The F-35 jet’s electro-optical targeting system and distributed aperture system use long-range, high-fidelity infrared and electro-optical cameras to gather threat information, which is then analyzed, processed, organized and displayed for pilots in a position to further network the information.

Tracking a maneuvering, high-speed cruise missile from a distant aerial location gives ground-based air defenders a much greater operational time window within which to intercept, strike or destroy the approaching threat. Lockheed’s Hit-to-Kill Missile was launched during the test to intercept and destroy the incoming cruise missile.

The F-35 jet has been used with IBCS before but this most recent intercept broke new ground in several key respects. While an Army program, IBCS is intended to operate as a major contribution to the Pentagon’s Joint All Domain Command and Control effort to synergize, network and integrate communication nodes from air-land-and-sea locations in real-time. Using a common network system, nodes within an IBCS umbrella, such as a Patriot Missile battery or Sentinel radar system can share threat data and target track information across otherwise separated operational areas.