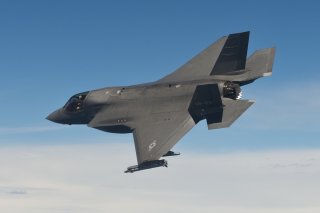 The state-of-the-art F-35 stealth fighter is truly one of a kind and well known for its stealth characteristics, weapons, costs, extensive development, and multinational force. The jet, however, has many lesser-known attributes which could arguably serve as a defining reason for its superiority.

Two words may sum this up almost completely: sensing and computing.

I recently had a chance to do some exclusive interviews with several F-35 pilots. Each of the pilots overwhelmingly explained that the sensing, computing, and data “fusing” on board the jet is truly the way in which the aircraft separates itself from others.

The F-35’s “sensor fusion” refers to a data analysis and organization process that uses early iterations of artificial-intelligence-enabled computing and integrates key information from otherwise separated data streams onto a single screen for the pilot. The computerized process enables pilots to view navigational data, mission details, targeting information, and threat data all on a single screen for the pilot, thus easing the cognitive burden.

Several of the pilots I spoke with had extensive experience flying fourth-generation aircraft and were, therefore, well-positioned to understand how the F-35 jet might compare.

“When I first got into the F-35—and even still today—the biggest, game-changing difference that I've seen specifically for the person in the cockpit, the decisionmaker, the pilot is the F-35’s fusion and integration of all of the different sensors from the aircraft,” Spinelli said. “It brings together a holistic picture that's quite amazing. This was never, never seen before on any fourth-generation platform. I don’t care what people say, or what widgets or gizmos they have. I would even say it rivals the F-22. Although I haven’t seen everything that the F-22 has on it. . . . When you look at the radar for the F-35, the electronic warfare (EW) system and then, of course, the Multifunction Advanced Data Link (MADL) combining it all together, that to me was the biggest difference between the F-35 and the legacy F-16s or F-18s.”

Another F-35 pilot told me that the “sensor fusion” process enables pilots to take on additional tactical functionality because much of the procedural work is automatically done for them. Sensor fusion, F-35 pilot Tony “Brick” Wilson told me, “reduces pilot workload and allows the pilots to have a situational ‘bubble’ so that they’re more than just a pilot and they’re more than a sensor manager. They’re true tacticians. The fact that the pilot has the spare capacity increases survivability and makes them more lethal,”  Wilson is Lockheed Martin’s chief of Fighter Flight Operations.