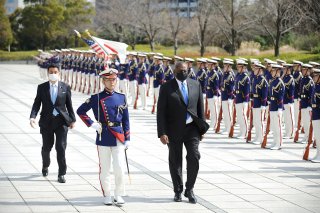 U.S. secretary of defense Lloyd J. Austin III and Japanese minister of defense Yasukazu Hamada met at the Pentagon to reaffirm both countries’ commitment to defend the U.S.-Japanese Alliance.

In a joint statement, Austin explained that the alliance “remains a cornerstone of peace and prosperity in the Indo-Pacific. And our countries are bound by deep friendship and trust, as well as by our common interests and shared democratic values. We also share a vision of a free and open Indo-Pacific and a rules-based international order as championed by the late Prime Minister Abe.”

But increasing authoritarianism in Asia and military adventurism in Europe have provided the impetus for reaffirming values and redlines.

“But China’s recent aggressive behavior and Russia’s unprovoked invasion of Ukraine are serious challenges to that vision,” Austin said. “So let’s be clear. China’s coercive actions in the Taiwan Strait and in the waters surrounding Japan are provocative, destabilizing and unprecedented.”

Russia’s invasion of Ukraine is ongoing. Though Moscow’s forces have experienced significant setbacks in recent weeks, the largest war in Europe in eight decades is far from over. Moreover, though China and Russia both share a disdain for the American-led order, Beijing and Moscow do not share a mutual defense alliance in the way that the United States and Japan or the United States and NATO do.

However, some fear that Russia’s military escapades in Ukraine may encourage China to fulfill its decades-long quest for reunification with Taiwan, including by force if necessary. But NATO’s response to the Russian invasion—staunch and unwavering military, financial, and humanitarian aid—shows China what the reaction around the globe might be to a Chinese invasion of Taiwan. It may also be why China has not provided Russia with significant assistance.

“Our response, together with Japan and our other allies and partners, has been responsible, steady and resolute,” Austin said. “Let me also reaffirm our unwavering commitment to the defense of Japan. And that includes our commitment to credible and resilient extended deterrence, using the full range of our conventional and nuclear capabilities.”

More concretely, Austin explained, "in the face of these challenges, we’re going to discuss ways to further strengthen our defense cooperation, including our joint efforts to modernize a U.S.-Japan alliance and bolster integrated deterrence.”

He added that while the United States and Japan are both interested in preserving peace in the Pacific, their commitment is also shared by other partner and ally nations. “I also look forward to discussing ways to bolster a free and open Indo-Pacific and to further deepen our cooperation with other like-minded allies and partners, including building upon recent trilateral engagement with South Korea and Australia.”