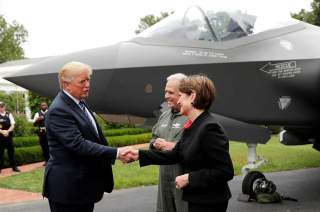 Key point: The F-35 has the technology to deliver nuclear weapons.

After years of expensive development, the first fully combat-capable Block IIIF F-35 stealth fighter are due to enter service in 2019. However, the Pentagon is already looking ahead to adding dozens of additional capabilities to a follow-up model called the Block 4—an upgrade so ambitious, its already budgeted to cost a whopping $16 billion.

A companion article details the major software and hardware upgrades to the F-35’s sensors, communication and propulsion systems, as well as Block 4’s troubled financial footing. Here, we’ll look at the new weapon systems due to be integrated in the Block 4 that will significantly expand the F-35’s maritime strike, air-to-ground capabilities and air-to-air lethality.

One major addition is the GBU-54/B Stormbreaker, also known as the Small Diameter Bomb II. Like the GPS-guided GBU-39 SDB I already integrated on the F-35, the 208-pound Stormbreaker is only six to seven inches in diameter, allowing eight to be stowed in the F-35’s confined internal weapon bays. If stealth is not a factor, a further sixteen can be stored on the wings.

However, the SDB II can additionally adjust course to hit moving targets in all weather conditions up to forty-five miles away, thanks to its tri-mode guidance options: an uncooled infrared seeker, a millimeter-wavelength active radar, and ability to home in on a target illuminated by laser. It also has datalink enabling two-way communication with launching F-35, allowing adjustment or even cancelation of the strike. The Stormbreaker’s 105-pound shaped charge warhead can lands on average within one meter of its target, and is effective against personnel, boats, and ground vehicles—even including main battle tanks, which have thin top armor.

The Pentagon hopes the Stormbreaker, combined with the F-35’s advanced electro-optical targeting system and synthetic-aperture radar, will enable the policing of potential no-drive zones—that is, areas in which military ground vehicles are forbidden to pass, based on the concept of the no-fly zone interdicting military aircraft.

However, Stormbreakers aren’t cheap at $115,000 each, so the Block 4 may also integrate the shorter-range GBU-54 Laser-JDAM. The 500-pound laser and GPS-guided bomb costs only around $20,000 and can also engage moving targets.

Another weapon due for full integration is the AGM-154 JSOW-C1, a larger thousand-pound glide bomb with a datalink and infrared seeker for terminal guidance designed to penetrate and destroy moving maritime targets up to seventy miles away when released at high altitude. These will give Navy F-35Cs significant maritime-strike capability.

More expensive, longer-range munitions like the far-reaching JASSM-ER and Long Range Anti-Ship Missile may only be integrated in a future Block 5 or Block 6 F-35. As the Lightning can approach closer to defended targets, integrating such long-range weapons is a lower priority. Meanwhile, non-stealthy fourth-generation fighters and bombers can benefit more from their use.

In terms of air-to-air capability, the F-35B is set to gain compatibility with the Block II model of the highly-maneuverable AIM-9X short-range missile, which the pilot can direct using a helmet-mounted sight. The Block II’s Lock-On-After-Launch capability means it can be fired from the F-35’s internal bay without a lock, then, following guidance transmitted via the F-35’s datalink, turn up to 180 degrees towards a target acquired by radar or even optically using the pilot’s helmeted-mounted sight, before finally homing in for the kill using its heat-seeker.

Speaking of the Helmet Mounted Display System, which uses cameras allowing Lightning pilots to “see through” their own plane, that is due be modified for lower weight and will also allow pilots to “look” directly behind them without having to turn fully around.

Addition of dual-rail missile racks for the F-35’s bays will also allow it to carry up to six longer-range AIM-120 air-to-air missiles instead of four, helping mitigate the still significant risk F-35s may be overwhelmed by more numerous aerial adversaries.

Block 4 is also expected to include integration of country-specific weapons requested by foreign F-35 operators, including the U.K.’s SPEAR cruise missile and Meteor anti-aircraft missile (considered to be one the most formidable long-range air-to-air missiles in service), Turkish SOM cruise missiles, and Norway’s Kongsberg Joint-Strike Missile, which can strike land or sea targets with a 500 pound warhead from up to 170 miles away. Norwegian F-35s will additionally even receive special drag-chutes to aid in landing on icy Scandinavian runways.

The F-35 Block 4 may also receive improved engines, and these may be designed to generate significant additional electrical output. Such surplus power could be eventually turned to powering airborne lasers weapons which could be used to blast incoming air-to-air missiles, ballistic missiles in the launch phase, and even enemy fighters. The Air Force plans to begin testing fighter and bomber-born lasers in the early 2020s, meaning any F-35 lasers weapon integration would likely only occur well after Block 4.

The scariest weapon Block 4 will bring to the F-35 is surely the B-61 Mod 12 nuclear gravity bomb, which has tail fins that can adjust the bomb’s trajectory to strike on average within 30 meters of a designated GPS coordinate. The B-61 has a selectable yield between .3 and 50 kilotons, and has bunker-penetration capabilities. The combination of precision and penetration means it could threaten an adversary’s leadership, command and control facilities, and hardened missile launch sites. As part of a NATO agreement, the U.S. B-61 bombs will also be available for deployment on fellow F-35 operators in NATO.

The forthcoming ability of a frontline F-35s to penetrate hostile airspace with little warning, and potentially deliver a tactical nuclear weapon will surely become a factor in any adversary’s military calculations, for better or worse.

Decisions to escalate to tactical nuclear warfare—that is, using smaller nuclear weapons against frontline military target—may become less appealing, when the likelihood of a deadly riposte by nuclear-armed F-35s must be considered. On the downside, it might also motivate nuclear preemptive strikes on F-35 bases. Also, adversaries uncertain whether F-35s intermittently ghosting on low-bandwidth radars are armed with conventional or nuclear weapons may be driven to escalate to nuclear warfare prematurely.

All in all, the Block 4 upgrade is set to round-out the F-35’s capabilities against a wide spectrum of targets, as well as fulfill promises to foreign F-35 partners to support their domestic weapon systems. But whether the Department of Defense can scrounge the necessary funds, and meet the ambitious development schedule, to deliver the Block 4 on time (and not over its already considerable budget, remains to be seen.

Sébastien Roblin holds a master’s degree in conflict resolution from Georgetown University and served as a university instructor for the Peace Corps in China. He has also worked in education, editing, and refugee resettlement in France and the United States. He currently writes on security and military history for War Is Boring. This first appeared in February 2019.