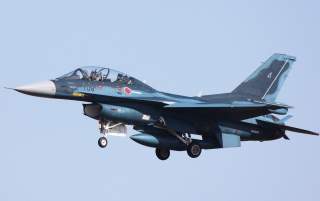 In the 1980s, Japan phased in its first domestic jet fighter to enter operational service — the Mitsubishi F-1. Tokyo wanted to follow up with a more capable fourth-generation F-2 “support fighter.”

It was an ambitious effort. And one that a tsunami nearly destroyed.

The Reagan-era Pentagon was worried that a purely domestically-designed Japanese jet would lack capability and compatibility with U.S. forces, and pushed for Japan to build an American design. But commercial interests in the United States feared transferring too much technology and set unfavorable terms.

In the end, after it was revealed a Japanese company had transferred propeller technology used in the Soviet Akula-class submarine, Tokyo was cajoled into having Mitsubishi and Kawasaki Heavy Industries build their own version of the F-16 Fighting Falcon, an affordable lightweight tactical fighter.

However, Lockheed Martin and other U.S. companies still would build 40 percent of the components. A prototype XF-2A first flew in 1995, and the type entered operational service in 2000.

The Japanese Self Defense Force wanted its Falcons tailored to its domestic hardware and local strategic situation as an island nation. The F-16 can attain twice the speed of sound and is renown for its superb maneuverability, but it possesses limited range.

Japan doesn’t have to defend a nearby land border or prepare for oversea wars. It needed a jet that could patrol the sprawling seas surrounding the Japanese home islands — subject to disputes with China and Russia — and if necessary engage attackers approaching from both air and water.

Therefore, the Mitsubishi F-2 was bulked up with enlarged fuel tanks for long range patrols, increasing its loaded combat radius by 50 percent to 520 miles. Compared to a regular F-16C, the F-2 is a half-meter longer, has larger strakes and tail, a three-piece canopy, and 25-percent larger wing surfaces to allow for greater maneuverability and additional weapons hardpoints.

To compensate for added weight, lightweight composite materials were incorporated, including radar-absorbent graphite epoxy that reduces the F-2’s radar signature.

The F-2’s slightly flattened nose houses what was the world’s first operationally deployed Active Electronically Scanned Array radar, the solid-state J/APG-1. It could detect an average-size jet fighter from 145 miles away and ships from 100 miles.

AESA radars are more jam-resistant than conventional radars, boast higher resolution and are harder to detect in return. While they have since become standard in cutting-edge fighters, U.S. Air Force F-16s have only begun to be upgraded with their own APG-83 AESA radars.

The F-2 can carry a heavier payload on no less than 13 hardpoints, though a standard load-out includes one or two extra fuel tanks, two to four short-range missiles and four anti-ship or long range air-to-air missiles.

In addition to its built-in 20-millimeter cannon and standard U.S. AIM-9L Sidewinder and Sparrow missiles, unguided bombs and rockets, the F-2 can employ uniquely Japanese munitions. For anti-shipping roles, the F-2 can lug ASM-1 Type 80 and ASM-2 Type 93 anti-ship missiles, which can strike ships up to 31 and 105 miles away, respectively.

Both subsonic missiles are initially guided towards their targets inertially or by GPS, but the ASM-1 then closes on its targets using a radar seeker, while the ASM-2 relies on infrared imaging.

Against distant aerial threats, the F-2 can employ AAM-4 radar-guided missile to strike aircraft up to 60 to 75 miles away and infrared-guided AAM-5s for ‘short’ range engagements up to 22 miles away. The latter use vector-thrust motors for added maneuverability.

Basically Japan built the most tricked-out F-16 possible in the 1990s, at a cost roughly equivalent to $127 million per plane — four times greater than a regular F-16. In fact, the F-2 cost more than Japan’s F-15J Eagle twin-engine fighters did, even though the latter could carry heavier loads over greater distances and at greater speed.

The obviously dubious deal led to the order being cut from 141 planned aircraft to just 98, including 62 single-seats F-2As, 32 two-seat combat-capable F-2B trainers and four prototypes. Just one F-2 was ever lost in a flight accident, when an F-2B caught fire taking off from Nagoya Airfield on Oct. 31, 2007.

The F-2s currently serve in four squadrons — the 3rd Tactical Fighter Squadron at Misawa Air Base in northern Honshu, the 6th and 8th squadrons at Tsuiki Air Base on the southwestern island of Kyushu, and the 21st Training squadron based at Matsushima.

The fighters are nicknamed “Viper Zeroes” — a combination of the American F-16 nickname with a reference to the F-2’s entry into service in 2000, which also alludes to the famous Mitsubishi A6M Zero fighter of World War II. The pilots of the Vipers are known as “snake charmers.”

The F-2s have experienced a little excitement performing their self-defense role. On Feb. 7, 2013, two Russian Su-27 Flankers streaked into Japanese air space near Hokkaido during the Northern Territories Day, during which Japanese rally for the return of the Kuril islands seized by Russian at the end of World War II. Four F-2s scrambled to intercept the Flankers — and snapped photos of the encounter.

Six months later, F-2s intercepted two Tu-142 Bear maritime patrol planes that intruded on air space near Kyushu island. In 2017, they faced off against another two Tu-95MS bombers escorted by two Su-35Ss that performed a flyby of the Japanese coast.

However, the F-2’s greatest foe would prove to be a force of nature.

It also flooded all 18 two-seat F-2Bs of the 21st Training Squadron at Matsushima with corrosive salt water. One of the F-2s was even flung into a building. In one fell swoop, Japan had lost one-fifth of its F-2 force.

The F-2 production line was closing down that year, and the effect of the global recession made it reopening it unaffordable. After an initial survey, six of the F-2Bs were deemed only moderately damaged and repaired for a staggering 80 billion yen — equivalent to $724 million.

Spare parts were used to restore another seven for $66 million per airframe, with repairs completed in February 2018. For a period, Japanese pilots had to train on F-16s, but the 21st Squadron was finally reactivated in 2016 with 10 F-2Bs.

The F-2s should remain in service at least until 2030 and have received a number of upgrades, most notably J/APG-2 AESA radars designed to work with new AAM-4B missiles with a built-in AESA seeker and increase range of 75 miles.

An advanced new XASM-3 ant-ship that can hit targets 124 miles away traveling three times the speed of sound has already been tested on the F-2 and is in production. Other improvements include support for Sniper XR and J/AQ-2 targeting pods, JDAM GPS-guided bombs, domestic digital engine controls and new datalinks.

Nonetheless, the tsunami losses spurred the JSDF’s to hasten development of a domestic Mitsubishi F-3 stealth fighter to replace the F-2. Though again, Tokyo is considering cutting costs by partnering with Lockheed Martin for a proposed F-22/F-35 hybrid stealth fighter.