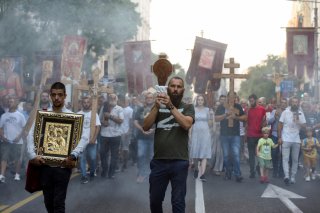 Serbian president Aleksandar Vucic had initially forbidden the pride march, which is usually held each year in a different European country. The Serbian leader cited the risk of violence between LGBT activists and right-wing counterprotesters to justify his decision, arguing that Serbian police could not guarantee the security of the march.

Despite Vucic’s warnings, several thousand LGBT activists marched on Saturday morning from the country’s Constitutional Court in downtown Belgrade to a nearby park, a portion of the march that the group had originally intended to take before the ban.

Counterdemonstrators protested outside of churches in the area but were generally kept separate from the marchers by Serbian police. The march itself largely took place without incident, and the arrests were made around the periphery of the event when demonstrators carrying smoke bombs clashed with police. Serbian authorities later claimed that thirty-one people had been arrested during the violence.

Although Serbian authorities condemned the pride marchers for defying the government’s orders, they also explicitly forbade counterprotests from Serbia’s religious right and warned that they would be prosecuted if they attempted to incite conflict. “We will not tolerate any violence in the streets of Belgrade, any more than illegal marches,” Serbian interior minister Aleksandar Vulin said in a statement before the march.

Serbia has been a candidate for admission into the European Union since 2012, but the Balkan country’s stances on social issues, including LGBT rights, have led to concern among several Western European nations. Homosexuality and gender transition are legal in Serbia, but same-sex marriage is not legally recognized and same-sex couples are not allowed to adopt children. Moreover, although the legal status of homosexuality is protected, many Serbians are opposed to LGBT activity, largely due to the influence of the highly conservative Serbian Orthodox Church.

More than twenty foreign missions in Belgrade, including those of the United States, Britain, and France, signed a joint statement to Vucic urging him to lift the ban. During the event, the U.S. embassy urged American citizens not to attend, citing “the potential for unruly crowds [and] violence, as well as possible fines.”