Fighting Blind: The Army Is Preparing to Battle Without GPS 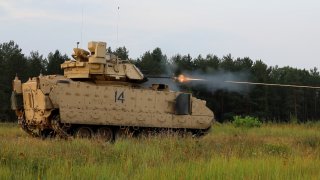 The U.S. Army has spent years preparing to operate in a “GPS denied” environment, meaning a combat scenario in which GPS navigation and connectivity are jammed, interrupted, hacked, or disabled.

For years, many military planners have assumed that one of the first moves a great power adversary will likely attempt in war is to disable U.S. GPS systems. If GPS systems are destroyed, the U.S. military will lose navigation, targeting, and communications capabilities, as well as the ability to operate unmanned systems programmed to follow GPS waypoints. To address this challenge, the Army has been working to identify alternative methods of establishing positioning navigation and timing (PNT) technologies.

How would the Army fight if it were blinded by a successful GPS jamming attack? One solution lies in a program called the Mounted Assured Positioning Navigation Timing Systems (MAPS). The Army has awarded a $500 million deal to Collins Aerospace to acquire MAPS systems in the coming years. While some of the technical specifics are not available for security reasons, an essay from the Army’s Program Executive Office, Intelligence, Electronic Warfare, Sensors (PEO IEWS) says the system introduces cutting-edge anti-jamming protections.

The approach with MAPS is to secure GPS systems while integrating new PNT technologies to provide non-GPS-reliant connectivity.

It makes sense that the Army plans to integrate MAPS into tactical and armored combat vehicles, given the extent to which vehicle-mounted force-tracking technologies rely upon GPS and PNT. The service plans to put MAPS on the Abrams battle tank, Bradley fighting vehicle, Paladin Howitzer, Stryker combat vehicle, and Humvee. The Army also reported that it will use MAPS with short-range air defense and indirect fire protection capability, both systems which require precision tracking of incoming enemy threats and an ability to fire kinetic interceptors.