The Five Greatest Firearms Inventors of the 19th Century 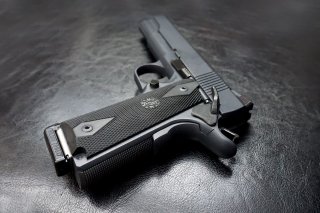 While everyone knows the inventions of Alexander Graham Bell, Thomas Edison and the Wright Brothers—even if there is some debate whether they were actually the first to invent or the first to patent. Yet, no one knows exactly who invented the firearm—all that is known is that its origins in China go back more than 900 years. However, there are a handful of inventors and innovators that stand out from the rest.

Technically French inventor Clement Pottet wasn't really a gun designer, but his contribution to firearms remains truly significant. At the beginning of the nineteenth century even trained soldiers could barely get off more than three shots a minute, but thanks to Pottet's development of the centerfire cartridge, rapid fire was made a reality.

In fairness, Pottet had in essence built on the work of Charles Howard, who developed the fulminates that were used in percussion caps; as well as the Joshua Shaw who patented the caps that evolved into the primers used in metallic cased ammunition—but Pottet was the visionary who made it practical. It took the Frenchmen more than twenty-five years—from 1829 to 1855—to perfect his design.

That in turn allowed Hiram Berdan of New York and Colonel Edward Boxer of the Royal Arsenal in Woolwich, England, to each independently develop improved primers that transformed the way firearms could be loaded and fired. Centerfire ammunition allowed for repeating rifles and even the machine gun to be developed—and while someone else probably would have gotten there, Pottet was the first.

As with many great designers Christian Sharps didn't technically invent as much as innovate, but the same could be said for Steve Jobs and Bill Gates. In the case of Sharps, he was an innovator second to none as his Sharps rifle became the first commercially successful breech-loading rifle.

The concept dated back to the sixteenth century but it took some 300 years for Sharps to be the guy on the spot to actually make it work. From 1848, the year when he received the patent for the falling-block rifle design, until the company ceased production in 1881, more than 120,000 Sharps rifles were produced.

The Sharps carbine was the most widely used cavalry carbine of the American Civil War, and it gave the Union forces a great advantage. At the time infantry were still lucky to fire three or four rounds a minute—but mounted troopers armed with the Sharps could fire eight to ten rounds. The firearm also saw extensive use in the American West both in the hands of soldiers and frontiersmen.

Before his death in 1874 Sharps was awarded a total of fifteen firearms-related patents, including one for the Sharps Derringer, a four-barrel, single-action pistol that utilized a revolving firing pin.

Samuel Colt: Much More Than the Revolvers that Bear his Name

Long before U.S. Steel, General Motors or IBM were founded there was another American company that became an industry giant: Colt's Manufacturing Company. Founded in 1855 it was actually a successor corporation to Samuel Colt's earlier firearms-making efforts that began in 1836. That longevity and the fact that even non-gun owners likely know the name "Colt" says a lot about this American weapons pioneer and business titan.

Samuel Colt is largely known for his revolvers, but it is a misconception that he invented the firearm. Here is another case where he was an innovator who took an existing concept and perfected it. The Colt Paterson, which he introduced in 1836, popularized the revolver with Americans and made him one of the nation's wealthiest men.

If it were just the revolver design, Colt would still be among the most influential gun designers, but his other contributions were even more notable. He was among the first to introduce interchangeable parts and an assembly line, which revolutionized firearms production, but he also was a pioneer in the use of celebrity endorsements, corporate gifts and colorful ads to promote his products.

While known as a firearms designer, Colt was a shrewd businessman who was among the first to successfully use advertising, product placement and mass marketing to sell his products—and this would continue after his death. Today the iconic Colt Single Action Army "Peacemaker" could rightfully be described as the gun that tamed the West, and although it built on Colt's designs it wasn't developed until 1873, more than a decade after his death. Yet, this firearm so associated with the Old West bears Colt's name. That's the power of marketing, which Colt most certainly had a hand in!

Among the many inventions from Richard Jordan Gatling include the screw propeller, a wheat drill for planting,a steam tractor and a motor-driven plow—but it was his Gatling gun that he is most certainly remembered for today. Ironically, the weapon that was the first successful rapid fire gun was developed not to kill more soldiers, but rather to reduce the need for so many soldiers on the battlefield!

During the American Civil War, Gatling saw how more soldiers died of disease than from gunshots and sought to develop a weapon that could supersede the need for large armies and believed that deaths from disease would be diminished.

Technically not a "machine gun" in the modern sense, his rapid-fire, spring-loaded, hand-cranked Gatling gun was a forerunner to the weapons that were to come. The Gatling gun's operation centered on a cyclic multi-barrel design that allowed for its rapid fire, but also facilitated cooling of the barrels. Although the Gatling gun did see some limited use in the Civil War it wasn't officially used by the U.S. Government until 1866, and was used by the U.S. Cavalry on the frontier—however, Lieutenant Colonel George Armstrong Custer chose not to bring his Gatling guns with his force at the time of the Battle of Little Bighorn. Gatling Guns were used by the U.S. Army in the Spanish-American War to great success. The Gatling gun was only declared obsolete in 1911after forty-five years of service with the U.S. military.

Richard Gatling sold his patents to Colt in 1870, but remained president of the Gatling Gun Company until Colt absorbed it in 1897. During this tenure as president he developed a version that replaced the hand cranked mechanism with an early electric motor, which allowed the weapon to achieve a rate of fire of nearly 3,000 rounds per minute.

"Whatever happens we have got a Maxim gun and they have not." Long before gangster rappers offered lyrical prose about Mac-10s and AK-47s, British poet Hilaire Belloc wrote those words above about the Maxim machine gun, which highlighted how iconic the weapon had become by the late nineteenth century.

As with Richard Gatling, Sir Hiram Stevens Maxim was an inventor who held numerous patents—and in the latter's case these included those for a mousetrap, hair curling iron and various steam pumps. Maxim even laid claim to inventing the lightbulb and also experimented with powered flight; yet it was his gun design that the American-born, British inventor is now most remembered for. As the story goes he was told if he wanted to make a "pile of money" he should "invent something that will enable these Europeans to cut each others' throats with greater facility."

The concept of a machine gun came to Hiram Maxim when he was knocked over by the recoil from a rifle, and his design employed one of the earliest recoil-operating firing systems. The concept remains in use today, where the energy from the recoil on the breech block is used to eject a spent cartridge and insert the next one. The Maxim design could fire 600 rounds, allowing a lone soldier to have the firepower of an entire line of troops. The Maxim gun was introduced in 1883 and used by the British Army in numerous colonial campaigns. Variations of the Maxim design, made under various licenses, were used by the British, Russian, and German armies amongst others in the First World War. Maxim guns saw use in more than 100 conflicts from 1886 to 1959—making even more prolific than the AK-47 would see during the Cold War.