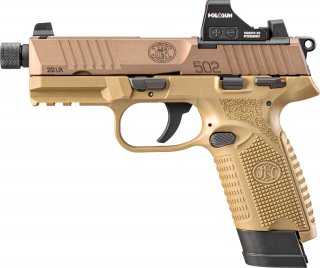 I love FN guns. Among my favorites are the Five-Seven, P90, and SCAR. They also have a solid line of pistols. You just can’t beat that Belgian magic, baby. Obviously, when I heard they made a .22 pistol a made a beeline for my nearest gun store and ordered it. I bought it as the baby brother to my FN 509 in the very same FDE. I’m hoping for a solid training pistol and a crazy fun plinker. Did the FN 502 live up to those lofty goals? Read on to find out!

If you’ve ever seen a FN 509 or related pistol, then you know they’re downright gorgeous. The 502 is the very same. I had to buy the tactical version so I was treated with an exposed hammer, suppressor height sights, and a threaded barrel for all my suppressor desires. I’m rather fond of the aggressive slide serrations located on the front and rear, as I always am. The grip texturing is super aggressive and makes it easy to get a good purchase when shooting barehanded. Along where the frame and slide meet there are familiar features like a serviceable slide release, takedown lever, and an unused safety. FN nailed the design on this one.

While the design isn’t lacking, the trigger is. The trigger is just terribly spongy. It’s a whole lot of me not having fun when I focus on it. I’m disappointed that this was not addressed when the 509 has the same crappy trigger. But all told, this is the worst it gets when it comes to the 502T luckily.

The reliability is something else. FNH went hard on marketing this gun as an ammunition-eating machine and at the moment I’m inclined to agree. I ran through the usual Federal loads, Remington Gold Bullets, and CCI with absolutely no issues whatsoever. A couple of other reviewers noted a failure of the slide to lock, but luckily that didn’t happen to me.

This pistol is still fantastically fun to shoot especially since I can draw it out of my 509 holster without issues. The accuracy was solid too. It comes out of the box with an optic cutout so I was able to throw an RMR on there immediately. Pinging targets at ten to fifteen feet away was a breeze and a lot of fun. Further out was harder but still manageable. I couldn’t ask for more out of this pistol.

I love this gun. There's just something weirdly appealing about guns I like, but small. I get to feel like a recoil-controlling god. But even looking at it as a regular .22 pistol, you can see it’s a standout. It has all the well-designed visuals of a 509, offers solid reliability, accuracy, and most importantly is way too much fun out on the range. It’s definitely become one of my favorite .22 caliber pistols. It’s also relatively inexpensive as far as fancy guns go at $500 MSRP. It’s definitely a solid gun for the money, especially as a fan of FNH.