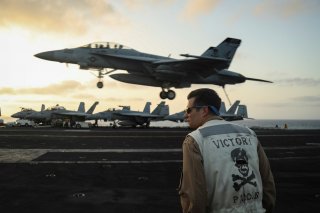 Earlier this month the USS Nimitz (CVN 68) was the latest U.S. aircraft carrier to have sailors test positive for COVID-19. The nuclear-powered carrier, which is based in Bremerton, Washington, had been readying for deployment. The Nimitz Carrier Strike Group, CSG-11, is part of the U.S. Navy's 3rd Fleet, which coordinates with the U.S. 7th Fleet to conduct missions throughout the Pacific.

General John Hyten, vice chairman of the Joint Chiefs of Staff, told reporters that more cases of the highly infectious coronavirus would be reported on U.S. Navy vessels. Hyten added that it would be necessary for the Navy to adapt to the situation, and said "This will be a new way of doing business that we have to focus on. We're adjusting to that new world as we speak today."

Despite an isolated number of cases on USS Nimitz, the carrier will set sail "shortly," added Army General Mark A. Milley, chairman of the Joint Chiefs of Staff.

The Navy has already taken the extreme decision to extend the deployment of the USS Harry S. Truman (CVN-75), the rest of its carrier strike group, until the Nimitz is able to be deployed. CSG-8 has conducted two deployments in a row without a major maintenance period.

"We'll keep the Harry S. Truman at sea until next up, which is the Nimitz, set sail," Milley told reporters in a joint news conference with Defense Secretary Mark Esper. Milley added that the U.S. Navy has some 90 vessels deployed around the world amid the pandemic and that nearly half of the Navy's cases of COVID-19 have been aboard the USS Theodore Roosevelt, which remains in port in Guam as the crew recovers. One sailor from the carrier has sadly died from the disease.

The crew of the Nimitz has been undergoing a 14-day pier-side isolation period before she heads to sea for pre-deployment training. In California, its escorts, command staff and Carrier Air Wing 17 are also observing the same 14-day period before the elements of the strike group begin to come together in the Pacific later this month.

The U.S. Navy has not detailed plans for the CSG-11, which is under the command of Rear Adm. Yvette M. Davids, but carriers and their strike groups must complete training and certain exercises to be certified for deployment. It is also not clear what tasks if any, the Nimitz and CSG-11 needs to complete. The Nimitz, which emerged from dry dock following a year of maintenance in 2018, has been training since.

The Navy has called for two carrier strike groups within different hemispheres to continue patrol at all times. The USS Dwight Eisenhower (CVN-69) is currently in the Middle East while the aforementioned USS Harry Truman is in the Atlantic, allowing the U.S. Navy to maintain two such strike groups at sea.