Forget North Korea: Pakistan Might Be the Real Nuclear Threat 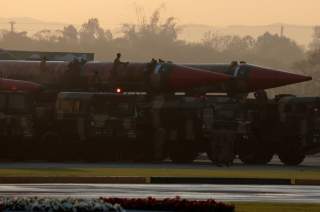 Despite all of the attempts from the nuclear non-proliferation community, Pakistan will continue to develop and strengthen its nuclear deterrent as long as the high brass in the Pakistani military continues to have an India-centric mindset in its defense policy.  India and Pakistan have fought three wars since Islamabad’s independence in 1947, and in each case, the Pakistanis were the either the losers are forced into a stalemate before acceding to a ceasefire (the 1971 breakaway of eastern Pakistan, which would later be named Bangladesh, was an especially embarrassing defeat for the Pakistanis).  Islamabad hasn’t forgotten these cases ever since.  And for the Pakistanis, the lessons of these past conflicts are all the same: we cannot repeat history.

Could Pakistan be more of a nuclear security threat to Israel than Iran? Conventional wisdom suggests that a nuclear-armed Iran is the most pressing potential nuclear threat to Israel. It’s a country run by a Shia theocracy espousing invective for Israel on a daily basis. Indeed, Iranian supreme leader Ayatollah Ali Khamenei ranted about the possibility of Israel’s forthcoming destruction as recently as this week. However, Azriel Bermant, a research associate at the Tel Aviv-based Institute for National Security Studies, offered a different take earlier this year in a column he wrote for the Israeli newspaper Haaretz: the real threat might come from Pakistan.

Bermant postulated that despite the worries of both Israeli and American policymakers alike, Iran may not be the nuclear threat that Israel should focus on. After all, Tehran doesn’t have a single nuclear weapon at its disposal. Further, the Joint Comprehensive Plan of Action signed in July will forestall the Iranians from the nuclear threshold for the next fifteen to twenty-five years.  Rather, Bermant argues, “one could argue that Islamabad poses more of a threat to Israel than Tehran does.”

It’s worth considering because the Pakistani government possesses a fairly large nuclear arsenal. Over the years, President Barack Obama has expressed reservations about the continuing growth and stability of Pakistan’s nuclear weapons program. Only three months into his first term in April 2009, President Obama voiced his concerns: “We have huge…national-security interests in making sure that Pakistan is stable and that you don’t end up having a nuclear-armed militant state.”

Here is why the United States likely continues to have those worries, nearly seven years later:

There are thousands of nuclear weapons in the world today.  According to the latest count from the Federation of American Scientists, the five original nuclear powers have a combined 15,465 nuclear weapons between them, most of which are divided amongst the United States and Russia.  Yet the fastest growing nuclear arsenal in the world is not included in this number.  While Pakistan has a range of 100-120 nuclear weapons in its possession — a figure that pales in comparison to the United States or Russia — Islamabad has devoted a tremendous amount of its military budget to growing its arsenal and procuring the associated delivery systems that are needed to launch them.

More alarming than Pakistan’s current stockpile is the projected growth of its arsenal over the next decade.  In a wide-ranging report for the Council on Foreign Relations, professor Gregory D. Koblentz of George Mason University assessed that Pakistan had enough highly enriched uranium to increase its stockpile to 200 nuclear weapons by 2020 if fully utilized.  Percentage wise, this would mean that the Pakistani army would be projected to increase its nuclear weapons arsenal by roughly sixty-seven percent over the next five years.  In other words, Pakistan could have as many nuclear weapons as the United Kingdom by 2020. Moreover, Pakistan falls outside the purview of the Nuclear Non-Proliferation Treaty.

To guarantee that they the ability to rapidly expand their stockpile, the Pakistani military is investing in reprocessing plutonium in addition to enriching uranium.  In January 2015, the Institute for Science and International Security reported that the Pakistanis opened up their fourth plutonium facility at Khushab, which provides Islamabad with an additional channel to construct nuclear bomb material in a relatively short period of time.  “Its expansion appears to be part of an effort to increase the production of weapons-grade plutonium,” the ISIS report (not to be confused with the terrorist group) reads. “Allowing Pakistan to build a larger number of miniaturized plutonium-based nuclear weapons that can complement its existing highly enriched uranium nuclear weapons.”

To say that the U.S. intelligence community is closely monitoring the development of Pakistan’s nuclear weapons program would be an understatement.  The U.S. government is doing more than just monitoring: they are actively preparing for a terrible catastrophe and engaging Pakistani officials in the hopes that they will stop pouring resources into the expansion of their program. The last thing Washington wants or needs is a nuclear crisis flashpoint in a dangerous and unpredictable region filled with an alphabet soup of Islamist terrorist groups. The U.S. government under both George W. Bush and Barack Obama has been trying to prevent such a crisis scenario from occurring.

Thanks to the 2010 Wikileaks disclosures, we can glean how seriously the State Department took the problem.  In September 2009, on the margins of a nuclear security meeting among the  five permanent members of the United Nations Security Council, Undersecretary for Arms Control Ellen Tauscher discussed with China’s foreign minister about how intransigent Islamabad had been in implementing the Fissile Material Cutoff Treaty (FMCT).  In response to Tauscher’s concerns, China’s representative agreed to discuss the treaty problems with Islamabad directly.

The prospect of Pakistan losing control of its nuclear materials has been a persistent headache for the United States. It is a scenario that military planners and intelligence officials have been planning for even before the September 11, 2001 attacks.  NBC News ran a long investigative piece on U.S. plans to unilaterally secure Pakistan’s nuclear arsenal if a situation erupted that would put U.S. interests at risk — whether it included nuclear materials being stolen by a terrorist group; extremists infiltrating the ranks of the Pakistani army or a quick escalation of violence between Pakistan and India.  The investigation found that “Pakistan’s weaponry has been the subject of continuing discussions, scenarios, war games and possibly even military exercises by U.S. intelligence and special operations forces regarding so-called ‘snatch-and-grab’ operations.”

The safety of Pakistan’s nuclear stockpile remains a key action item for the U.S. intelligence community today — so much so that Pakistan-specific analytical cells were created in order to address the lack of information that America’s intelligence professionals were receiving about Islamabad’s proliferation activities.

3. Nukes Have Gotten Pakistan Into Trouble With the U.S.

Pakistan’s high enrichment of uranium is not a new problem — it has complicated the U.S.-Pakistan bilateral relationship since the mid 1970’s, when U.S. lawmakers first enacted a strict set of economic sanctions on Islamabad’s nuclear weaponization activities.  The 1977 Glenn amendment added to the Foreign Assistance Act was the first of many congressional efforts to pressure Pakistan (and any other non-nuclear weapons state not party to the NPT) to refrain from conducting a nuclear explosive test.  That legislation came in handy in May 1998, when President Bill Clinton enacted sanctions on Pakistan in retaliation for a nuclear test that occurred two weeks after India’s own testing (New Delhi was also sanctioned at the time).  Those sanctions prevented the U.S. from sending any foreign assistance to Pakistan — a restriction that was eventually eased later in the year under a new statute.

President Clinton’s predecessor also had his run-ins with the Pakistanis when it came to nuclear proliferation.  In 1990, President George H.W. Bush was unable to certify to Congress that Pakistan did not possess a nuclear device.  Because President Bush could not make the certification required under U.S. law, Washington was compelled to substantial cut off military and economic assistance to the Pakistani Government — a provision that was in effect until 1996, when the Brown amendment relaxed the restrictions on economic aid.

All of the country-wide sanctions were in addition to the numerous penalties on companies who violated U.S. arms control export policies, which forbid corporations around the world from delivering “material, equipment, or technology…to be used by Pakistan in the manufacture of a nuclear explosive device.”  Dealings between Washington and Islamabad were very tense over the nuclear issue throughout the 1980’s and 1990’s.  That all changed after 9/11, when Washington enlisted Pakistan’s support against Al-Qaeda.

4.     Pakistan Needs Nukes for its Defense

Pakistan likes to fancy itself as a peer competitor to its historical rival India in the South Asia region.  But if we’re going to be perfectly honest, Islamabad cannot compete with India in conventional capabilities.  By virtue of New Delhi’s large population, impressive economic growth, and potential to continue improving its GDP in the years ahead, Pakistan will always be second-fiddle to its principal adversary in terms of army strength, battle tanks and combat jets.  India spent nearly $50 billion on modernizing and building up its armed forces in 2014; Pakistan spent slightly more than $10 billion.  The figures are not even close.