France Tried to Merger a Cruiser and a Submarine. This Is the Disaterous Result. 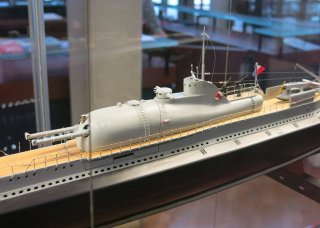 After the end of hostilities during World War One, the victorious allies signed the Washington Naval treaty in an attempt to prevent an arms race in naval construction. Strict limits were placed on the number of so-called capital ships that signatories could build — battleships, cruisers, battlecruisers, and aircraft carriers.

Their tonnage, or size, and gun size, or caliber were also limited by the treaty. Britain had suffered heavy losses from submarine attacks during the war and argued strongly for an outright submarine ban, but to no avail. France quietly laid down what was at the time the largest submarine in the world.

The Surcouf was laid down by the French in 1927 and was the first of a planned class of cruiser submarines that would patrol above water. The Surcouf’s mission was to maintain contact with French overseas colonies, particularly in North Africa, hunt down enemy surface ships, and destroy enemy convoys.

On top of the Surcouf’s hull, a watertight turret was installed that housed two huge guns, 8 inches in diameter that fired while the Surcouf was surfaced. Once surfacing began, the guns could be fired in less than three minutes. These massive guns were originally intended to arm Washington Treaty-compliant French heavy cruisers. Each gun used two 52-pound bags of smokeless powder to fire a 271-pound high explosive or 295-pound armor-piercing shell nearly twenty miles, though the Surcouf’s turrets could not increase their elevation high enough to match heavy cruiser distances.

The Surcouf also carried a floatplane in an onboard hangar that was used for observation and directing the deck gun’s fire. Anti-aircraft guns were also mounted on the Surcouf’s deck. A motorboat could be launched from the Surcouf that could carry up to 40 people in a locked compartment — either passengers, or prisoners picked up after the Surcouf sank a surface ship.

Her range was very high for an interwar submarine. Enough diesel fuel was carried to give the Surcouf an 11,500-mile range when surfaced, allowing the large sub to easily cross the Atlantic to the United States and Canada without needing to refuel or refit.

Following the fall of France, the Surcouf was manned by Free French forces and was sent to the Pacific theatre, to help liberate or support the ration operations of French possessions in the Pacific.

The Surcouf disappeared in February 1942, near Panama. An American freighter reported with colliding something that was partially submerged, presumably the Surcouf, though the freighter did not stop despite hearing voices calling for help in the water.

After the war, a French report attributed the Surcouf’s loss to friendly fire, though this has not been independently confirmed. One book written on the subject hypothesized that the Surcouf was hit by American bombers that didn’t recognize that large hull, mistaking the submarine for a Japanese or German Sub.

What actually happened to the Surcouf remains a mystery.