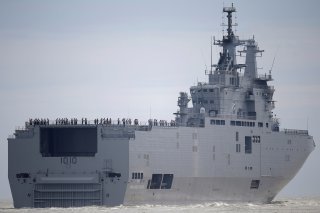 The U.S. Navy activated its two hospital ships and is deploying them to U.S. cities to help reinforce hospitals anticipating a spike in coronavirus patients.

Mercy is heading for Los Angeles. Comfort is on the way to New York City. The vessels won’t actually treat coronavirus patients. Rather, they will handle non-virus trauma cases in order to free up beds and personnel in civilian hospitals.

Not all countries have hospital ships, however. France for one has settled on the next best thing. A Mistral-class amphibious assault ship.

French minister of the armed forces, Florence Parly, on March 20, 2020 announced that Tonnerre, one of three Mistrals in French service, would sail to the island of Corsica in order to evacuate around a dozen coronavirus patients, then at Ajaccio hospital, who required urgent care in more advanced hospitals on the French mainland.

Tonnerre arrived in Corsica on March 21, 2020. An official photo depicts an ambulance carrying a patient into Tonnerre’s vehicle hold via a ramp. The vessel was scheduled to depart Corsica that night.

A Mistral boasts two operating rooms, an x-ray room, a dental office, scanners, 20 patient rooms and 69 patient beds including seven for intensive care. It’s possible to add 50 temporary beds to a Mistral’s hangar. Tonnerre’s crew reportedly added isolation equipment to some of its facilities in order to protect themselves from infection.

Tonnerre’s sister ships Mistral and Dixmude also are available for coronavirus missions. Dixmude is on the Mediterranean. Mistral is underway in the Indian Ocean region.

The U.S. Navy’s own 33 amphibious ships, in particular, its 10 big-deck Wasp- and America-class vessels, also could perform a pandemic-response role. The 40,000-ton amphibs have even more medical capacity than the Mistrals do. Wasps and Americas can handle as many as 600 patients at a time.

But at present, the American amphibs are making the pandemic worse, not better. The U.S. Navy’s first coronavirus cases were among the crew of USS Boxer, a Wasp-class vessel.

A Boxer sailor told Pro Publica that, after the diagnosis, an officer called a meeting and, for 30 minutes, packed 80 sailors into an internal space where they were forced to stand just two feet apart.

The U.S. Centers for Disease Control recommends people stay six feet from each other in order to minimize the risk of spreading the virus.

“The meeting on the ship — which also has outdoor spaces that possibly could have been used instead — left some attendees feeling angry and worried that they’d been placed in unnecessary danger aboard the vessel,” Pro Publica reported.

“Definitely not enough room to maintain appropriate distance,” the sailor said. “People are wondering why we gathered in a room contradictory to CDC guidance.”