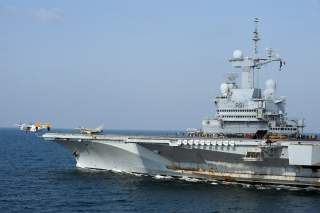 The French navy's only aircraft carrier is back in action following an 18-month, $1.5-billion overhaul that compelled French aviators to practice aboard an American flattop.

"France has been trying to increase its presence in the Indo-Pacific region for several years," according to NHK World Japan. "The country navigated its ships through the South China Sea, where China has been militarizing islands."

Before beginning her refit, Charles De Gaulle deployed three times to the Middle East -- twice in 2015 and again in 2016 -- to participate in the coalition campaign targeting Islamic State.

Before that, the carrier took part in the air war over Afghanistan in 2001 and the NATO campaign in Libya in 2011.

It's a problem having just one carrier. During refits, Charles De Gaulle's aircrews must find ways of maintaining their skills. It's for that reason that most navies that possess carriers aim to acquire at least two of the vessels. France and Russia are alone among major carrier powers in operating just a single flattop.

Charles De Gaulle launched in 1994 and could require replacement as early as the 2040s. At the 2018 Euronaval conference, French defense minister Florence Parly said the Marine Nationale would define the new vessel's requirements in 2020. The new flattop could serve in to the 2080s.

"They still aspire to be a major player," Michael Shurkin, an analyst with the California think tank RAND, told The National Interest in reference to the French. "Having a nuclear carrier really supports that ambition."