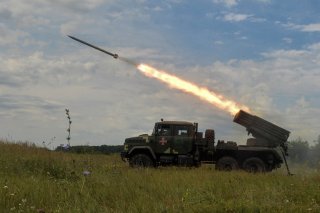 The Pentagon says Russia is floundering due to ongoing Ukrainian advances, the impact of Western economic sanctions, and Ukraine’s ability to target and destroy Russian command and control nodes.

“Ukrainians have become very effective in finding and killing, you know, Russian command and control and destroying large levels of Russian materiel,” a senior official explained in a background briefing to reporters on Monday.

This is by no means surprising, given that Ukrainians are now employing long-range ground-fired rockets and missiles such as High Mobility Artillery Rocket Systems (HIMARS). Last month, Chairman of the Joint Chiefs of Staff Gen. Mark Milley said HIMARS were having an immediate impact on the battlefield.

The reasons for this are clear. Previously, Ukrainian forces had no way to counter indiscriminate long-range Russian rocket and missile fire. Russian attacks on Ukrainian civilians, which have killed women and children, can finally be countered to some extent. For months, Ukrainian forces relied on aerial surveillance from their own drones and NATO capabilities. Yet without air superiority, they have had no way to target Russian missile launchers, fire bases, troop concentrations, and command and control nodes. Now, however, HIMARS in the field have allowed Ukrainian forces to do this and have an immediate tactical impact.

For months, Russian rockets with ranges of 200 to 300 miles have been killing Ukrainian civilians. Additionally, many of them are unguided munitions which means the attacks often strike non-military targets such as apartment complexes, neighborhoods, and other civilian areas. Recently, Russian forces have targeted the port city of Odessa, which is now shipping Ukrainian grain out of the Black Sea. Ukrainian forces have also been able to leverage surveillance data and destroy Russian targets from stand-off ranges less vulnerable to incoming Russian artillery.

The specific ranges of the weapons Ukraine now operates are not available for security reasons, yet there are some clear minimum capabilities. HIMARS and Guided Multiple Launch Rocket System (GMLRS) rockets can strike targets from dozens of kilometers away. These precision weapons, first introduced by the U.S. Army in 2010, give ground commanders an entirely new target envelope by enabling precision-guided strikes against key targets. This opens up attack possibilities to avoid additional damage or casualties.