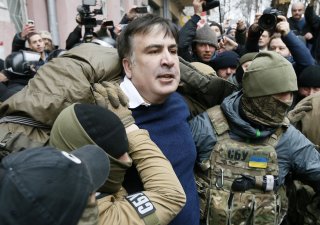 Mikheil Saakashvili, the former president of Georgia arrested after returning to the country from exile in early October, is in “critical condition” after a hunger strike protesting his treatment, according to a statement issued by the Public Defender of Georgia.

The statement also claimed that Saakashvili, who has been on hunger strike for more than a month, was at risk for a number of fatal ailments if left untreated, including heart failure and gastrointestinal bleeding. While Saakashvili had been moved from the regular prison to its hospital for treatment, the public defender alleged that his treatment at the prison hospital had been insufficient.

“As the patient’s condition is critical, it is immediately recommended to continue his treatment in a functional and well-experienced [...] hospital, in particular in the intensive care unit,” according to the statement.

Saakashvili initially ascended to the presidency after the resignation of Eduard Shevardnadze in 2003 during the pro-democratic “Rose Revolution.” He served in that office from 2004 until 2013, overseeing sweeping anti-corruption efforts, significant economic growth, and a transition to multi-party democracy, although he also oversaw a brief but disastrous war with Russia in August 2008.

Although broadly popular during his tenure, Saakashvili was accused by his successor of corruption, leading him to leave the country. He went into exile in Ukraine, where he served as the governor of its Odessa province at the invitation of then-President Petro Poroshenko.

On the eve of Georgia’s local elections, Saakashvili returned to the country, urging his supporters to converge in Tblisi, the country’s capital. However, he was immediately arrested on arrival and jailed, based on a 2018 court case that sentenced him in absentia to six years in prison.

Saakashvili’s supporters have mobilized to protest his sentence and international human rights groups, including Amnesty International, have voiced concern about how he is being treated.

The sitting government of Georgia has been unsympathetic to Saakashvili’s case; Georgian Prime Minister Irakli Garibashvili drew outrage after he quipped that Saakashvili “had the right to commit suicide” via hunger strike. The Georgian government has also indicated that it will not consider a pardon for the former president.

The State Department has not weighed in on whether the accusations against Saakashvili are true or not, but it has released a statement indicating that it is “closely following” developments related to his health and urging the Georgian government to “treat Mr. Saakashvili fairly and with dignity, as well as to heed the Public Defender’s recommendations about appropriate treatment.”